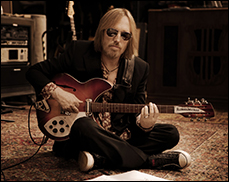 LOS ANGELES (CelebrityAccess) — Tom Petty, the multi-instrumentalist singer, songwriter, and frontman for the iconic rock band The Heartbreakers has died. He was 66.

Petty suffered cardiac arrest and was found unconscious at his home in Malibu early on Monday morning and was taken to UCLA Medical Center but could not be revived, his long-time manager Tony Dimitriades said in a statement.

“We are devastated to announce the untimely death of our father, husband, brother, leader, and friend Tom Petty,” Dimitriades said in the statement.

He died peacefully at 8:40 p.m. Pacific time, surrounded by family, his bandmates, and friends.

Tom Petty and the Heartbreakers recently completed their 40th-anniversary tour, intended to be the Heartbreaker's final major tour of the US. The tour saw the Petty and the band performing rare tracks from their extensive catalog and wrapped just last week with a final performance at the Hollywood Bowl in Los Angeles.

A native of Gainesville, Florida, Petty set his sights on a career in music at an early age.

"The minute I saw the Beatles on the Ed Sullivan Show — and it's true of thousands of guys — there was the way out. There was the way to do it. You get your friends and you're a self-contained unit. And you make the music. And it looked like so much fun. It was something I identified with. I had never been hugely into sports. … I had been a big fan of Elvis. But I really saw in the Beatles that here's something I could do. I knew I could do it. It wasn't long before there were groups springing up in garages all over the place," Petty told NPR's Fresh Air in 2006.

By 1975, Petty along with future Heartbreakers Mike Campbell and Benmont Tench had gained local notoriety performing as the band Mudcrutch and signed with Shelter Records after relocating to Los Angeles, but their debut release, 1975's "Depot Street" failed to gain traction on the chart and the group dissolved.

After Mudcrutch parted ways, Petty, Tench, and Campbell, along with Ron Blair on bass Stan Lynch on drums and reformed as the Heartbreakers and recorded their first album "Tom Petty and the Heartbreakers" in 1976.

The album scored some initial successes for the Heartbreakers, breaking into the charts in the US and UK, with hits such as "Anything That's Rock 'n' Roll," "Breakdown," and what would become one of the group's signature songs "American Girl."

Their sophomore follow-up "You're Gonna Get It!" cracked the top 40 album chart but it was their third release that was the real breakthrough for the band. The Jimmy Iovine-produced "Damn the Torpedoes" (1979) built on the band's earlier commercial success and quickly went platinum, hitting #2 on the Billboard album charts on the strength of hits like "Refugee" and "Don't Do Me Like That."

In addition to his work with the Heartbreakers, Petty was also a member of George Harrison's supergroup The Traveling Wilburys, joining Roy Orbison, Harrison, Bob Dylan and Jeff Lynne to record two albums. As well, Petty staged a successful solo career, starting in 1989 with the smash hit "Full Moon Fever" followed by "Wildflowers" (1994) and "Highway Companion" (2006).

Famously, Petty was a champion of the concept of artistic control over his music, going to court to fight against the transfer of his contract when MCA Records acquired ABC Records in 1979. At the time, Petty said he refused to be “bought and sold like a piece of meat,” and declared bankruptcy as a result before he was later signed to Backstreet Records, a subsidiary of MCA.

Petty won 3 Grammys over the course of his career and the Heartbreakers were inducted into the Rock & Roll Hall of Fame in 2002.

"I'd like to see us break some new ground and leave some sort of mark on the music," Petty once said, according to his citation. "That would be the nicest thing – to give something back, as noble as it sounds. If you could make some little dent in rock, where that little area is yours – that's what I'm striving for now."

Petty was married twice, once to Jane Benyo, with whom he had two daughters, but the couple divorced in 1996. In 2001, Petty married Dana York in a ceremony presided over by rock luminary and ordained minister Little Richard.