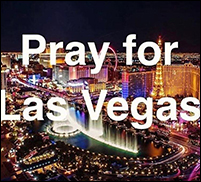 (CelebrityAccess) — Since the deadly and tragic shooting that took place at the Route 91 Country Music Festival in Las Vegas, expressions of shock, horror, and sympathy

In a series of tweets, Jake Owen, one of the performers at the festival wrote:

"Gun shots were ringing off of the stage rigging and road cases. No one knew where to go..thank you LVPD and responders for keeping us safe"

"Praying for everyone here in Vegas. I witnessed the most unimaginable event tonight. We are okay. Others arent. Please pray.

Another festival performer, Chris Young also issued a series of tweets in the immediate aftermath of the shooting, writing:

"Spent I don't know how long on the floor of a trailer behind the stage… know multiple people are dead. Listening to that gunfire

"I'm not gonna say anything else other than I'm lucky to be alive. As are many others… and so many people are gone… this is heartbreaking

Kane Brown, who also performed at the festival posted a photo of the festival's main stage along with a terse caption: "Prayers to Vegas"

Live Nation CEO Michael Rapino also took to Twitter to express his grief and sympathy for the victims, writing: "Our hearts are with the victims in Las Vegas, their families and loved ones who are grieving this morning and to our @LiveNation employees."

Blackbird Productions tweeted: "Our thoughts and prayers go out to everyone impacted by the horrific events in Vegas. Simply heartbreaking."

The Country Music Association's official Twitter account offered: "CMA & the Country Music community are deeply saddened today and send our support and prayers to all the victims in Las Vegas."

Scott Borchetta expressed a sentiment that many of us are feeling today, tweeting: "I cannot believe what I am waking up to this am. None of us are untouched by this hate. It must stop. My heart's shattered."

Jerry MacDonald, CEO & President of The Cynthia Woods Mitchell Pavilion in Texas issued a statement that said: "We are truly saddened by the tragedy that unfolded in Las Vegas last night; our thoughts are with the victims and families that have been affected by this devastating incident. The safety of our guests, staff and artists has been and will always be our top priority at The Cynthia Woods Mitchell Pavilion. We will continue to implement heightened security at all events."

DJ & Producer Steve Aoki used Instagram to call for his fans to donate blood if they could, writing: "My heart and prayers go out to all those affected right now. Still processing what just happened right here in my city. We all are and I know there's a lot of you out there that want to help. One of the best ways if you're here in Vegas is to go to unitedbloodservices.org and donate blood. They are running out!! This is coming from my friend @beardofvegas CEO of St Rose San Martin hospital. For those of you that want to help that aren't from here, I'll post up more soon as I get it. United Blood Services at 6930 W. Charleston Blvd. Las Vegas, NV 89117 (702) 228-4483 is opening shortly to take blood donations in response to Las Vegas shooting. If you're able and awake, please consider going to donate now or sometime later today. All blood types are needed, hospitals are running low."

Jason Aldean's record label BMG released a statement as well, "BMG today expressed its sadness at events at the Route 91 Harvest Festival in Las Vegas last night (Sunday, October 1) in which at least 50 are reported dead and 400 injured. The shooting occurred during a set by Jason Aldean signed to BMG label Broken Bow Records (BBR). Aldean, his band and crew and two BMG staff members who were attending the festival were all uninjured."

BMG CEO Hartwig Masuch and Executive Vice President of Broken Bow Records added: "We are horrified by the events in Las Vegas overnight and relieved to report that all of our people have escaped uninjured. Too many others were not so fortunate. We send our condolences and best wishes to all of those affected by this dreadful act."

Cary Sherman, Chairman, and CEO, Recording Industry Association of America wrote: “We are devastated; our hearts heavy. We stand together as a community in mourning. No words can really describe the unimaginable horror and senselessness of what happened last night in Las Vegas. These were music fans simply enjoying their favorite artists. We honor the victims and the heroes, and we pray for healing.”