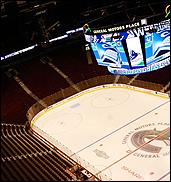 An official unveiling of the external and internal signage will happen at the downtown Arena prior to the start of the 2010-11 NHL season; the Canucks' 40th anniversary playing in the NHL

According to the Vancouver Sun, the deal comes as Rogers is attempting to capitalize on inroads in the turf of their telecommunications rivals Telus, who are the dominant player in the region.

"There is no question this is reinforcing our commitment to the province, to the West, to being a national player," Nadir Mohamed, Rogers president and CEO said during a news conference at the arena.

Although GM's name is no longer attached to the name of the arena, the company indicated that it intends to remain a sponsorship partner inside the venue.

"We want to be more focused on our brands and on the specific products and the attributes of the products," Tony LaRocca, GM Canada's communications director told the Sun. "This give us an opportunity to do that in a way that allowed us to keep our partnership with these folks which has been really good for us over the years." – CelebrityAccess Staff Writers