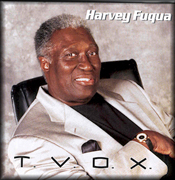 Born on July 27, 1929, in Louisville, KY, Fuqua (the nephew of Charlie Fuqua of the Ink Spots) started a vocal group in his hometown called the Crazy Sounds. Later, they moved to Cleveland, OH, where Fuqua was the lead singer with Bobby Lester, Alexander "Pete" Graves and Prentiss Barnes, with Billy Johnson on guitar.

The group caught the eye of legendary rock & roll DJ Alan Freed, who got them to appear on his radio show and concerts. In 1952, Freed signed the group to his Champagne Records label after changing their name to the Moonglows. They later left Freed and signed to Chance Records for a short stay, then signed to Chess Records.

In early 1958, the group broke up. It was then that Fuqua met a young vocal group from Washington, DC who called themselves the Marquees. One of the group's members was Marvin Gaye, whose vocals especially impressed Fuqua.

Trying to keep the sound of the Moonglows alive, Fuqua joined the group together, and with Reese Palmer, James Knowland, Chester Simmons, Chuck Barksdale (on loan from the Dells) and Gaye, he continued to record. The group changed their name to Harvey and the Moonglows.

In 1958, they scored their massive signature hit, "Ten Commandments of Love."

There he recorded Lamont Dozier and Johnny Bristol, two talents who would go on to success with Motown Records. Meanwhile, Fuqua was still working with Chess, producing sides on Etta James.

In 1961, he started his own independent labels, Tri-Phi and Harvey Records. His roster included the Spinners, Junior Walker & the All Stars and Shorty Long.

After growing tired of the rigors of running a small independent label with no distribution or edge against the major labels, Fuqua got a break when he was hired by Berry Gordy to head Motown's Artist Development department.

The move allowed Fuqua to bring Johnny Bristol, Tammi Terrell and the Spinners to Motown Records, where he was assisted by Gwen Gordy, Anna Gordy, Maxine Powell and Cholly Atkins.

He also scored a hit with former Temptations lead singer David Ruffin's solo "My Whole World Ended (The Moment You Left Me) (early 1969).

In 1971, Fuqua left Motown Records, signing a production deal with RCA Records. Two acts that he had previously signed to his talent agency, The Nightlighters ("K-Jee") and New Birth ("It's Been A Long Time") were also signed to the label. He also discovered disco pioneer Sylvester, producing several hit singles, including "Dance (Disco Heat") and "You Make Me Feel (Mighty Real)." Fuqua was also Smokey Robinson's road manager for a while.

The Moonglows reunited in 1972, with Fuqua, Lester, Graves, Doc Williams, and Chuck Lewis. They produced an LP, "The Return of the Moonglows," and made a remake of "Sincerely, " which went to number 43 on the R&B chart.

The summer of 1982 saw Fuqua reuniting with Marvin Gaye, collaborating on Gaye's "Midnight Love" LP which went to number seven pop in late 1982, sold two million copies, including the gold single "Sexual Healing" which stayed at number one R&B for ten weeks.

In 2000, he set up his own Resurging Artist Records, and was an Advisory Board member of The Rhythm and Blues Foundation.

Fuqua was working with S.T.A.R.S., an inspirational group at the time of his transition.