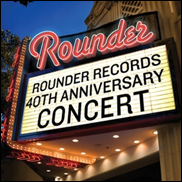 The concert was filmed in high definition by High Five Entertainment. Some of the program highlights include Alison Krauss & Union Station’s performance of the song “Restless” from their Grammy winning, million selling album Lonely Runs Both Ways, Mary Chapin Carpenter’s performance of her smash radio hit “He Thinks He’ll Keep Her,” Irma Thomas belting out her R&B chart topper “You Can Have My Husband But Don’t Mess With My Man,” Steve Martin’s performance of songs from his Grammy winning album The Crow, Bela Fleck tearing it up with Jerry Douglas on a song from the early Rounder Bela Fleck recording “Duets,” and a rousing grand finale that blended blues, R&B, zydeco, country, and bluegrass during a gospel medley of “Angels Watching Over Me,” “I’ll Fly Away” and “Down By The Riverside.”

The artists featured in this PBS special have collectively garnered over 53 Grammy Awards and sold over 25 million albums. The program’s Executive Producer and long time Rounder Senior VP, Brad Paul said, “It is a real thrill to have so many of our amazing artists represented in this show. The musical diversity and artistry is exceptional and rarely seen on TV any more. Hats off to PBS for their strong commitment to quality television.”

PBS’s VP of Fund Raising Programming, Joe Campbell adds, “PBS is delighted to present a very special concert event, celebrating 40 years of incredible music with some of the finest musicians working today. PBS is one of the few places where concerts like this can be seen in their entirety and we’re proud to present these great musicians to our audience.”

Rounder Records was founded in 1970 by Ken Irwin, Marian Leighton Levy and Bill Nowlin. With only their passionate enthusiasm for American roots music lighting the way, the three Boston area college students cast their lot into the perilous music industry. “Before founding Rounder, we were basically music fans,” says Rounder Records co-founder Ken Irwin. “None of us had any record industry experience whatsoever,” echoes co-conspirator Bill Nowlin.

This untested trio have gone the distance: from humble beginnings 40 years ago, to winning Album of the Year for Raising Sand at the 2009 Grammy Awards. Rounder is now considered one of America’s premier independent record labels, and has emerged as the preeminent source for vital, uncompromised music of all genres. –by CelebrityAccess Staff Writers