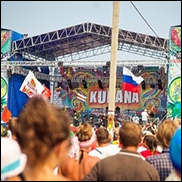 KALININGRAD, Russia (VIP NEWS) — Kubana, Russia`s biggest outdoor rock festival to feature major foreign acts, has come under pressure amid a tightening of the screws and rising conservative pressure in the country, as well as the fall of the national currency.


Last year the festival was ousted from its traditional Black Sea venue, prompting a move to the Kaliningrad region, a Russian exclave on the Baltic Sea. But even with its new location, local Orthodox activists are unhappy and have vociferously protested against the event.


Earlier this week, Orthodox activist Mikhail Cherenkov claimed that the festival "cultivates alcohol consumption and debauchery and should be investigated by the country`s security and drug enforcement agencies."


Conservative legislator Vitaly Milonov supported Cherenkov, claiming that the festival could turn into "a hotbed of promiscuity, alcoholism and drug abuse."


Fortunately for Kubana, local authorities didn`t side with the event`s opponents.


"Kubana is definitely going to be held in the village of Yantarny, Kaliningrad region, on August 6 to 9," the festival`s producer Ilya Ostrovsky confirmed to Billboard, adding that opinions of the festival`s opponents are irrelevant.


Meanwhile, promoters of other Russian shows have been less lucky, and Orthodox activists have been able to disrupt or cancel a number of concerts over the last couple of years.


And while Orthodox activists might still try to disrupt Kubana, another major challenge the festival is facing is the fall of the ruble, which has lost about 50 percent of its value over the past year.


Since its inception in 2009, the festival has hosted sets by the likes of Korn, System Of A Down, Madness, The Offspring, Gogol Bordello, Scooter, The Prodigy, Guano Apes and Die Antwoord.


But with the weak ruble, bringing top-level foreign acts to Russia could be a problem, even though the Kaliningrad region, sandwiched between Poland and Lithuania, is much closer to Europe than the festival`s previous location.


"The festival`s budget is going to be roughly the same as in the previous years," Ostrovsky said. "We are saving on the logistics and many infrastructure elements, trying to find a balance in a new economic situation."


He added, though, that the financial situation is certainly having an impact.


"We are trying to talk to foreign artists," Ostrovsky said. "Some understand our situation, and some don`t."


So far, four foreign acts have been announced, including Hollywood Undead and Enter Shikari. –According to Billboard