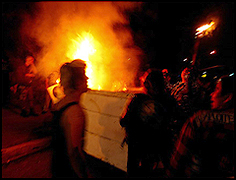 The rioters spilled out of a tense “British Invasion 2K6” punk rock show, and took to the streets fighting, injuring several police officers and damaging more than 60 businesses.

Mayor Pat Morris and interim Police Chief Michael Billdt delivered the tally of costs, damage and injuries in two large, black binders to the NOS Events Center, saying that the venue is responsible for compensating the businesses and law-enforcement agencies.

NOS Events Center attorney Ron Skipper told the San Bernardino Sun that the facility has insurance, as did the concert promoter, but he did not address the issue of culpability. He said all claims would be forwarded to the insurance companies.

City Councilwoman Esther Estrada told the paper that problems with the events center in the past demonstrates a need for change.

“They should pay for everything the extra police, the damages, the harm that came to police officers, the harm to the community,” she said. “Every single dime should be put at the Orange Show’s doorstep.

Estrada said she intends to push for state legislation to give the city some power over events at the center. As it is now, the events center does not fall under the city’s jurisdiction because is it considered a state fairground.

“There’s not a whole lot we can do right now,” she said. “It’s time to look at how these entities work within a community.”

The total damage, reported by the Sun as $487,663.05, with over $290,000 going to property damage of local businesses. A nearby Jack-in-the-Box restaurant was nearly demolished by rioters wielding rocks, bats and planks, and claimed more than $100,000 in damage alone. Eighteen of the restaurants windows were broken.

Morris was concise in his comments to the venue’s board members, saying, “Contained in the two binders is the after-action report concerning the civil disorder that resulted…I’m sure we’ll talk further about these events.” –by CelebrityAccess Staff Writers