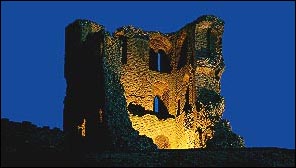 (CelebrityAccess MediaWire) — Where did the money go? That's what bands and companies involved in a September 17 concert at Scarborough Castle are asking. The concert, after which scuffles broke out when creditors turned up, seeking the money they were owed, has devolved further into a contentious legal battle. These revelations were revealed in an October 26 meeting which led to the dissolution of In the Castle Ltd. In The Castle was incorporated in February by Adrian Allen, who was the director and the only shareholder at the time.

Representatives at the meeting were told that the failure of the company was due to a lack of tickets being sold and "the loss of revenue from beverage and food sales as a result of logistical issues and the loss of a contract with English Heritage as a result of disorder at the venue".

Unsecured creditors are owed nearly £113,000 and with concert receipts netting just over £5,500 dollars, they are unlikely to be reimbursed. Attendance was poor for the event, ticket sales were reported to be only 2,400, meaning that an additional 3,700 tickets would need to be sold to break even, a full 1000 over the listed capacity for the venue. The list of creditors includes Crown Hotel – £940 Acorn Scaffold, of East Knapton – £7,350, English Heritage – £3,750, Greenwoods Hire, of Staxton – £2,871, North Yorkshire Police – £2,500 and Scarborough Council – £1,100. – CelebrityAccess MediaWire