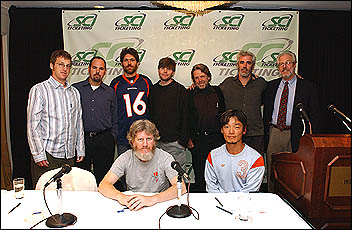 (CelebrityAccess News Service) –- Members of the rock band The String Cheese
Incident joined representatives of their ticketing company, SCI Ticketing,
and others at a news conference in New York City on August 11 to explain the details of a lawsuit filed in the U.S. Federal Court in Denver, CO last week.
SCI Ticketing filed the lawsuit claiming that ticketing giant Ticketmaster
has monopolized the ticketing industry, using its immense market power to
prevent competition for the sale of concert tickets. SCI Ticketing is the
first artist-centered ticketing company to sue Ticketmaster in federal
court.

SCI Ticketing is owned by The String Cheese Incident and their management company, Madison House Inc., based in Boulder, CO. Madison House is a management and booking agency that was started in 1996 with the vision of centralizing all of the music industry’s individual functions. SCI
Ticketing is one of the “family of businesses” located in the Madison
House/String Cheese headquarters.

According to Neil L. Glazer, an attorney at the Philadelphia law firm, Kohn
Swift and Graf, P.C., who is leading the team of lawyers representing SCI
Ticketing in the lawsuit, SCI Ticketing “had no other recourse than to take
legal action. SCI Ticketing has literally hit the wall in terms of being able to sell
tickets directly to fans because of Ticketmaster’s anticompetitive
practices. Our client has carved out a truly unique and
successful way to do business. Unfortunately, they simply cannot compete
because Ticketmaster is restricting the supply of concert tickets.”

Because Ticketmaster has exclusive dealing arrangements with so many venues and promoters, they have closed out independent, artist-driven ticketing companies like SCI Ticketing. This has made it increasingly difficult for
Madison House to book bands such as The String Cheese Incident, who feel
strongly about having the right to sell an allotment of their tickets
directly to fans.

Glazer said that the antitrust violations alleged in the suit include:

— Ticketmaster has entered into combinations, agreements, or conspiracies
with promoters, venues and others, in restraint of trade, in violation of
section 1 of the Sherman Antitrust Act; and

— Ticketmaster has monopolized, attempted to monopolize, or abused its
monopoly power in the market for the sale of tickets to popular music
concerts, in violation of section 2 of the Sherman Antitrust Act.

In addition, SCI Ticketing asserts a state law claim for tortious
interference with prospective business advantage. “The decision to file this lawsuit was not one taken lightly,” Glazer added.
“SCI Ticketing is a very small company, and Ticketmaster is one of the
behemoths of the concert industry. By filing this lawsuit, SCI Ticketing is
hoping to put a stop to anticompetitive practices that harm not only
innovative young companies, but also artists and consumers.”

Mike Luba, co-founder of SCI Ticketing and a partner in Madison House Inc.,
believes that being able to compete in the concert ticketing industry is
critical to his organization’s creative and business philosophy. “For bands
like The String Cheese Incident, who depend on heavy touring and lasting fan
relationships in order to succeed, services like direct artist-to-fan
ticketing are essential. It allows fans to enjoy the complete String Cheese
experience, from beginning to end,” Luba said. “This involves giving the
fans unprecedented attention for the essential part they play in the artists
career, and being able to offer fans SCI performances in high quality
venues and with affordable prices. Today, cultivating an artists’ fan base
through such things as touring, creative internet communications, and how
they sell tickets are some of the ways for bands to survive outside the
music industry’s corporate machine. Bands like The String Cheese Incident
rely on these tools for survival."

Keith Moseley, bassist/vocalist of The String Cheese Incident, said the band
has aligned SCI Ticketing with their creative vision to fulfill a life-long
dream. “Its been a huge commitment – our touring and reinvesting and
sacrifice,” said Moseley. “We hope this action sends the message loud and
clear that monopolies like Ticketmaster cannot and will not be the only game
in town; our fans deserve more than that.”

“We are not saying Ticketmaster doesn’t have a place in the ticketing
business, but we have a different philosophy of doing business, one that
caters more directly to our fans,” said Jason Mastrine, general manager of
SCI Ticketing. “Now, for the first time in our company’s history,
Ticketmaster is preventing us from acquiring the same reasonable ticket
allocations we used to get from promoters and venues. There’s room for
everyone in the mix.”

According to Luba, the music industry is changing dramatically with many
artists wanting to take more control of their own careers. “This involves
everything from the labels they choose to who does their ticketing,” Luba
continued. “But it’s not just about artists wanting to control their own
destiny and providing better service to their fans, it’s also an economic
issue. For many artists in today’s music industry, touring has become a
much more important source of revenue than record sales because constant
touring encourages community building and fan loyalty, which promotes a
sustainable career.”

“The music industry is suffering right now, but there is no reason that the
artists and their fans have to go down with it," Luba said. "We hope that the positive
ramifications of filing this lawsuit
will reach well beyond just The String Cheese Incident and their fans, and
benefit everyone." — by Bob Grossweiner and Jane Cohen

(CelebrityAccess News Service) — Concerning the String Cheese Incident Ticketing LLC lawsuit against Ticketmaster Corporation filed August 6 in the United States District Court for the District of Colorado, Ticketmaster uncharacteristically released a statement a few days after the lawsuit was filed. The statement reads: "While it has been our company policy to not comment on pending litigation, SCI

Ticketing has so distorted this issue in its own public statements that we feel compelled to clarify the record. One thing is clear, however: Ticketmaster's contracts and market conduct are legal and proper. Earlier this year a Federal Court dismissed a similar lawsuit brought against Ticketmaster. The claims that have been asserted by SCI Ticketing in this new lawsuit likewise lack merit and we are confident that they will also be dismissed after all the relevant facts are established."

"Ticketmaster competes for the exclusive right to sell tickets on behalf of venues and promoters. We are awarded those contracts in exchange for providing our clients with turnkey ticketing solutions to help them best sell tickets. These solutions include, but are not limited to: a comprehensive and industry leading technology infrastructure, a multi-access distribution network, box office and season ticket management systems, marketing support, customer service and access control."

"SCI Ticketing complains that it is being denied access to tickets that it wants to sell for a profit on its web site. Ticketmaster has always recognized the practice of allowing artists a meaningful allocation of tickets to give away or sell through legitimate fan clubs. These arrangements are always in cooperation with Ticketmaster's clients and in accordance with our client contracts. The allocation of fan club tickets in excess of historical reasonable levels flies in the face of our contractual guidelines with our clients. By demanding very large allocations of tickets, SCI has attempted to break valid contracts for its own self-promotion and monetary gain."

"This lawsuit is not about artist's rights; it's about money. SCI and its ticketing company are trying to step in for a "free ride" on the many benefits and services Ticketmaster provides it clients. SCI essentially wants to skim the best, most easily sold tickets, and leave Ticketmaster and its clients with the job of selling the rest. This is in spite of the fact that Ticketmaster has a contract granting them the privilege of selling their tickets on an exclusive basis."

"SCI has repeatedly threatened Ticketmaster's clients that if they are not given an excessive number of tickets to sell by SCI Ticketing for a profit, the band would move their performance to a venue that would comply with the band's demands. SCI's ticket demands have forced Ticketmaster's clients to make an unfair choice: either breach their contracts or lose the ability to host the band's performance. SCI's unfair leveraging of its popularity to achieve its for-profit ticketing goals is both improper and illegal."

"SCI ticketing is free to distribute tickets on behalf of artists and their fan clubs with the understanding that they must abide by the regulations and obligations of the performance venue — whether it's concession choices or ticketing contracts. It's a free country, SCI can make the choice of where to play, but they must respect the rights of others."

"Ticketmaster would prefer to resolve this matter outside of litigation, but now has no choice but to respond to the frivolous claims that have been asserted. Part of that response will be a counter suit by Ticketmaster against SCI Ticketing (and its founders) for intentionally interfering with contracts and relationships in which Ticketmaster has made great investments. The issue here is whether Ticketmaster and its clients have the right to contract for ticket distributions services, or whether SCI Ticketing can free-ride on those relationships by exerting pressure on Ticketmaster's clients to breach their contractual commitments."–by Jane Cohen and Bob Grossweiner