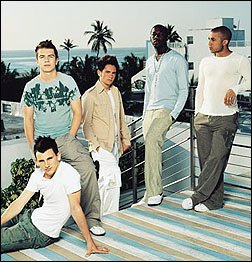 (VIP NEWS) — One True Voice, the boyband formed from the ITV1 pop talent show Popstars: The Rivals, have split up.

A spokesman from their record company Zomba said: "Unfortunately I can confirm that the band have split up."

The statement followed a story in Tuesday's Daily Mirror newspaper quoting band member Jamie Shaw as saying he was "over the moon" the group had split.

The confirmation ends weeks of rumors that the group – made up of Shaw, Daniel Pearce, Anton Gordon, Matt Johnson and Keith Semple – had called it a day after disappointing sales.

The band joins Hear'Say in the scrap heap of pop bands formed by reality TV but quickly disbanded once success was hard to maintain.

Pearce quit the band in June for a solo career. The band then released the single Shakespeare's (Way With) Words, but the single barely made it into the top 10.

The group were formed alongside Girls Aloud last November after winning their places in the Popstars: the Rivals series on ITV1.

But while Girls Aloud quickly scored a number one with their debut single Sound of the Underground, One True Voice were unable to top the charts with first song Sacred Trust, losing out in the December chart battle.

Girls Aloud's single became the Christmas number one and topped the charts for four weeks in total.

One True Voice were later voted Britain's worst group in a poll, just a day after their tour was cancelled due to poor ticket sales.