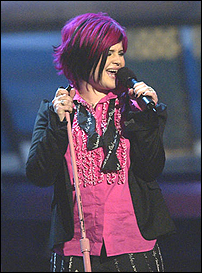 Osbourne, daughter of Ozzy and a star of the family's MTV reality show, has just finished supporting Robbie Williams at Knebworth.

She had been due to complete a solo tour, appear at festivals and support her father on the UK leg of his tour.

A spokeswoman apologized for the cancellations – but did not give any further details of her illness.

A statement said the cancellations were "due to health reasons. Many apologies to all concerned."

Osbourne, 18, had been due to appear at Edinburgh's T on the Fringe on Tuesday before presenting BBC One show Top of the Pops on Thursday.

Her brother Jack, 17 – who was recently treated in a drug and alcohol rehabilitation clinic – will take her place on Top of the Pops.

"Everyone on the program is really pleased that Jack could step in," a spokeswoman for the show said.

Kelly Osbourne was also lined up to perform at the V Festivals at the weekend, then travel to festivals in Austria, Belgium, Germany and Holland.

Her last dates were due to be with her father in London and Birmingham at the start of September.

She reached number three in the UK singles chart with her debut release, a cover of Madonna's Papa Don't Preach, almost a year ago.

Her follow-up, Shut Up, reached number 12 in February.

But her debut album, also called Shut Up, spent just one week in the UK top 40.