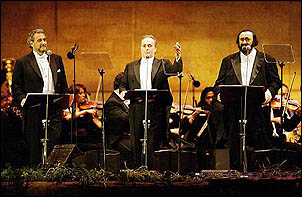 (VIP NEWS) — The Three Tenors received a standing ovation from 7,000 fans at a free concert to celebrate the restored Roman baths in the British city of Bath, Somerset.

Jose Carreras, Placido Domingo and Luciano Pavarotti sang at the city's famous Royal Crescent, watched by another 20,000 people on giant screens in a nearby park.

The tickets for the Crescent were handed out for free following a ballot, although some have appeared for sale on the internet for up to £500.

The concert was timed to coincide with the opening of the city's revived thermal spa complex – although following delays it will not open to the public until October.

The show lasted for more than two hours, beginning under blue skies and ending with a spectacular firework display.

The trio rekindled memories of their first performance together – at the end of the World Cup in Italy in 1990 – with a rendition of Nessun Dorma.

As concert-goers left the venue, Sarah Jacobs, 35, of Bath said; "I did not really know what to expect. It was a once in a lifetime experience".

Luke Desmond, 18, of Bradford-on-Avon, Wiltshire said; "I'm in a complete daze – it was spectacular. Words fail me".

The Royal Philharmonic orchestra was conducted by Janos Acs and choral pieces were performed by Bath Camerata and the Bath Abbey choir.

It could be the trio's last concert in the UK, after Pavarotti announced he planned to retire in 2005.

He told journalists on Wednesday: "For me, every time I meet these two gentlemen and share the stage with them it is an incredible experience."

Pavarotti said he was looking forward to the concert.

He said: "What is done here is really special.

"Everybody is going to be there, from all over the world if they want, and they hear a free concert."

Every day more than a million litres of the hot, mineral-rich water rises from three springs – used for healing and relaxation from pre-Roman times.

The baths were closed by the local authority in 1978 after a health scare and the withdrawal of NHS funding.

In 1997 Bath and North East Somerset Council was given National Lottery funding to support restoration work.