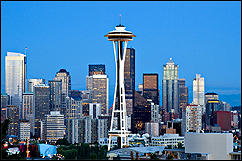 SEATTLE, WA (CelebrityAccess MediaWire) — Seattle’s highly contentious Summer Nights concert series has been cancelled for the second straight year, following months of legal battles and debates between organizers One Reel and the city.

But the location issues may have driven One Reel to seek out a choice locale to hold the events – the Seattle Center’s highly regarded Mural Amphitheatre.

One Reel and the Century 21 Committee, a citizens task force working with the Seattle Center are in discussions related to the feasibility of moving the popular concert series once again. Over the past few years, Summer Nights has bounced from Pier 62/63 to South Lake Union before finding strong community resistance at Gas Works Park last year, according to the Seattle Post-Intelligencer.

The Mural Amphitheatre has served as a venue for many events, from Bumbershoot to the Pain in the Grass concert series of the 1990s.

“It’s a beautiful site, and I know I’ve spent many nights at Bumbershoot at the Mural Amphitheatre stage looking up at the Space Needle all lit up, and you really get a big-city feeling,” Sheila Hughes, COO of One Reel and executive producer of Bumbershoot told the paper.

Many changes would be required at the site in order to fit the concert series. The grass-covered seating area, estimated to hold 2,000 to 5,000 people standing or sitting, would have to be able to accommodate a seated, ticketed event with a capacity for 4,000 or more concertgoers.

Other factors in the decision would include Seattle Center labor costs, the impact on established businesses on the campus, the stage design, mapping and what to do with garden areas, berms and slopes.

But the issues of noise and parking that have prevented One Reel from producing the concert series in other locations, are not likely to be a problem at the Seattle Center.

“Once we have all of that information in front of us, what kind of sponsorship do we need to make this idea fly? Does it seem doable?” Hughes said.

“We have to have a broad-based analysis that in the end boils down to sustainability over the long haul.”

Feasibility and cost issues should be figured out by April. If all goes well, One Reel will begin seeking sponsorship and bookings for 2008. –by CelebrityAccess Staff Writers