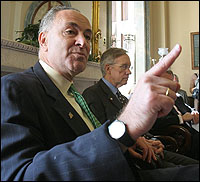 Schumer's letter comes in the wake of a successful seven event concert series held at the Hard Rock Cafe, which drew roughly 60,000 punters to the city. Ohter efforts by promoters such as Artie Kwitchoff and his Funtime Presents brought more than 200,000 people to shows in Layayette Square and Central Wharf. Artpark staged a 15-week series and attracted roughly the same number of fans.

"I strongly believe that LiveNation has an historic opportunity to bring marquee entertainment to one of the nation and the world’s great natural marvels. While the development history of Niagara Falls has a tortured legacy, the tide is clearly turning in favor of the tourist and the local economy as new development and planning means greater access to the recreational opportunities the City has to offer." Schumer wrote.

Schumer went on to say that a Live Nation concert series would complement the casino-based tourism industry driven by nearby Seneca Niagara Casino. as well as boosting custom for the regions business community.

"The Niagara Falls waterfront is a stunning and unique place to hold a concert series, and I can think of no better outfit than industry leader LiveNation. They could book marquee acts that would be a magnet to attract thousands of new visitors to Niagara Falls and would synergize with existing attractions like the Falls themselves, the casino and the emerging culinary institute," said Schumer. – CelebrityAccess Staff Writers