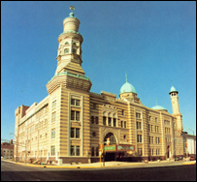 Live Nation's right to rename the Murat Shrine Center may well hinge on which interpretation of the lease that the promoter has with the Shriners the court ascribes to.

Live Nation had announced a deal with a Old National Bank on March 16th to rename the historic Indianapolis building, located at 502 N. New Jersey St. from the Murat Shrine Center to the Old National Centre (complete with new signage) but leaving the two associated venues; The Murat Theatre and the Egyptian Room with their original names.

Not so fast, said the The Shriner-affiliated Murat Temple Association, which owns the building. The association filed a March 26 lawsuit against Live Nation and Old National Bank, seeking damages and an injunction to remove the new signs from the building. The Shriners, a non-profit fraternal service organization, also argue that the venue-rename might lead the public to believe that the corporate-sponsored name changes accrues financial benefit to the Shriners, thus damaging their reputation, the Indianapolis Business Journal reported.

While the lease between the Shriners and Live Nation does include provisions regarding signs and improvements to the building, the Shriners maintain that it does cede the right to sell naming rights deals for the venue, to the promoter.

The lease had initially been signed by Dave Lucas's Murat Center LP in 1995 been renovated since then, by a partnership between Lucas' company and the city to the tune of $12 million. Live Nation ended up with the lease after as series of spinoffs and acquisitions in the late 1990s and early 2000s.

Old National Bank was named in the suit because the Shriners maintain that they did not do due-diligence to ensure that Live Nation had authority under their lease agreement to sell naming rights at the venue, the Indianapolis Business Journal said. The bank remains undeterred and plans to forge ahead, despite the suit.

"Our intention is to push forward," Randy Reichmann, Old National's Regional CEO told the Indiana Business Journal. "We've got a valid contract with LIve Nation, and we're going to let them work out the issues with the Shriners." – CelebrityAccess Staff Writers