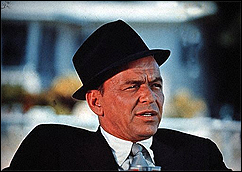 NEW YORK (CelebrityAccess MediaWire) — As the battle for a slice of the satellite radio pie continues, Sirius radio chalks up another victory. Frank Sinatra Enterprises has long had a home at XM, with its own channel, Franks Place, but in the last week of January, the station was replaced by High Standards, which played similar music but without the reference to the iconic crooner.

Meanwhile over at Sirius, a FSE found a new home on a new channel, Siriusly Sinatra. The channel, to be launched soon will be billed as the only channel on the radio "produced by the Sinatra family." In addition to weekly blocks of Sinatra's music, including rare convert performances and special programs created from archival material, including the Chairman's Hour, hosted by "Frank" himself (Or at least spoken words and music). Nancy Sinatra will also host a show on the channel as well.

Nancy Sinatra said, "We've seen SIRIUS become the programming leader in satellite radio with a name and reputation that represents the best there is in radio content. We want to take advantage of the promise of satellite radio that allows you to create in-depth, focused and exclusive programming, and so
we've made a SIRIUS choice,"

This marks the first instance of a recognizable name jumping ship from one satellite provider to the competitor.

Scott Greenstein, SIRIUS President, Entertainment and Sports, said, "This is a unique and unparalleled musical collaboration with the Sinatra family that makes SIRIUS the radio home of Frank Sinatra." – CelebrityAccess Staff Writers