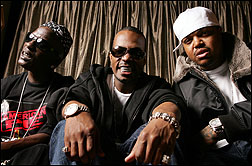 (CelebrityAccess MediaWire) — Organizers of the “So Fly For Spring Break” rap festival, held Saturday, April 14th on the grounds alongside Fort Lauderdale Stadium, are upset with a controversial advertisement placed in the South Florida Sun-Sentinel by the Fraternal Order of Police, that they claim played on racial stereotypes of rap and inflamed fears of unruly behavior.

The ad showed a blonde woman crying out for help on her cell phone after an armed man steals her purse. Text below the ad read: “Help, police! I’ve just been robbed! What do you mean you have no cops available!”

The rap festival, featuring Mike Jones, Dem Franchize Boyz and Three 6 Mafia, had hired 45 officers and 4 sergeants to police the grounds, which the police department said was the motivation for running the advertisement, warning citizens they would be understaffed throughout the rest of the city.

“We were sabotaged by the Fraternal Order of Police,” So Fly promoter Kandice James told the Sun-Sentinel.

Organizers had hoped to draw up to 10,000 for the concert, but saw only 200 fans show up for the performances, totaling a 4-1 ratio of fans to officers.

Mike Tucker, first vice president and chief steward of the Fort Lauderdale FOP, told the paper that the advertisement had no racial undertones, and simply wanted city residents to know the department was understaffed and officers were being required to work the concert on short notice from city officials.

“It wasn’t in any way to disparage that community,” Tucker said. “Our cops would rather be at home on Easter weekend.”

Some fans were upset that the ad specifically mentioned that it was a rap concert, which did not seem necessary if the union simply wanted to show residents that the police department needs more officers. –by CelebrityAccess Staff Writers