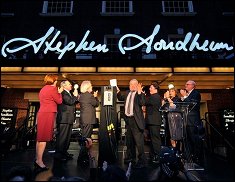 NEW YORK (AP) — Stephen Sondheim is getting a belated birthday gift: His name on a Broadway theater.

Sondheim, who turned 80 in March, was on hand when the new marquee was lit as it was formally renamed today in honor of the "Company" and "Follies" composer and lyricist.