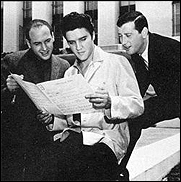 LOS ANGELES (CelebrityAccess MediaWire) — Sony/ATV Music Publishing has purchased the catalog of Jerry Leiber and Mike Stoller, who owned the publishing rights to more than 40 Top-40 hits, in the first significant acquisition for the company since Martin Bandier took over the helm earlier this month.

Leiber and Stoller’s catalog includes several R&B standards such as “Stand by Me” and “Poison Ivy,” and several of Elvis Presley’s best known tracks, including “Hound Dog” and “Jailhouse Rock.”

“These songs can only be described as gems that help define American music,” Sony/ATV Chairman/CEO Bandier said in a statement. “I am looking forward to exploring ways to introduce them to a whole new generation.”

Leiber and Stoller have worked together for more than 50 years and have been inducted into the Songwriters’ Hall of Fame, the Record Producers’ Hall of Fame and the Rock and Roll Hall of Fame. –by CelebrityAccess Staff Writers