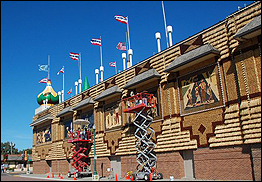 The building – redecorated each year with corn cobs, grain and grasses – snags about 500,000 visitors a year.
By Doug Dreyer, AP

Suzuki, who was traveling across South Dakota with a family from Sioux Falls, said she'd never seen anything like it.

The Corn Palace, first established in 1892, towers over Main Avenue in Mitchell, its yellow and green onion-shaped domes and orange minarets shining in the sun. Corn cobs, grain and grasses form murals that cover its walls. Some of the inside walls also are covered with murals made of corn and grasses.

The Corn Palace attracts about 500,000 visitors a year.

"They're just always amazed at something so recognizable that's made out of corn," said Troy Magnuson, who has worked with the local chamber of commerce for 19 years.

The theme for the corn artwork changes each year.

A local artist designed a Lewis and Clark theme for the exterior walls for 2004. Silhouettes of Meriwether Lewis, William Clark and Sakakawea were created with different natural colors of corn.

"I've been here a lot and this is one of the best I've seen," said Carla Homan, a teacher from Kansas City, Mo., who grew up in South Dakota. She had stopped in Mitchell on a concert tour with about 50 music students from the high school where she works.

"Everyone was like, 'You have to see the Corn Palace,'" said Karen Wollberg, a student on the trip.

Magnuson said many visitors return to check out the new murals and watch workers build the murals each summer.

"We were out here one time and they had it about half torn up," said Glee Huddleston of Greencastle, Ind. She had her husband had made a third stop at the Corn Palace en route to Mount Rushmore in western South Dakota.

Workers tear off the murals in June and July and start putting new designs up. Grains and grasses go on first, and the corn is put on later, after it ripens.

The artist traces the designs for the murals onto black roofing paper, which is tacked onto the building and covered with different colored corn and grains.

"It's like a big paint-by-number set," said Dean Strand, who has been raising the corn, sorghum and rye for the city-owned Corn Palace since 1982.

Strand can't say how many ears of corn go on the walls — partly because some disappear into the hands of tourists, or "guests from out of state," as he calls them.

"If an ear of corn is a good souvenir, so be it," Strand said.

Guests also can buy something corny from the gift shop across the street and take guided tours. Magnuson has been giving tours of the Corn Palace since he was in college.

"I always tell people on my tours to keep an ear out for the corny jokes," said Magnuson, who has become a bit of a Corn Palace history buff.

Grain palaces were popular in the late 1800s. They were built for harvest festivals and to prove the prairie really could produce crops. South Dakota had at least four grain palaces by the time Mitchell started its Corn Palace, Magnuson said.

The first festival was held in 1892, when officials built a wooden palace, covered it with grains and grasses and topped it with wooden minarets.

It was so successful that another, larger wooden palace was put up in 1905. In 1921, workers built a new steel and brick community center, which they still faithfully covered with corn and grasses every year.

But this time, there were no domes. "They said they were going to build this new, sleek building," said Mark Schilling, Corn Palace director. And that's what they got: a regular building covered in corn.

By the 1930s, domes were again atop the palace. And they've been there, in some form or another, ever since.

"Domes have been a big part of the Corn Palace ever since it was built," Schilling said.

That's why Mitchell took action after an aging dome and minaret slid off the roof in 2001.

Officials took a good look at the building and decided it was time to fix it up. They spent $1.4 million on a new large dome, two smaller domes, two minarets, a new gym floor and other improvements.

While the Corn Palace does attract plenty of tourists, local residents benefit from it as well. The Corn Palace is a multi-use center for Mitchell and the region, hosting stage shows, basketball games, farm machinery shows, polka parties and other events. It seats 3,100 people