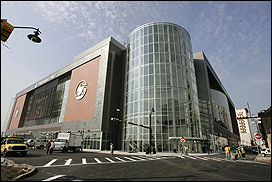 NEWARK (CelebrityAccess MediaWire) — Now that the new Prudential Center is up and running in Newark, many are wondering if the Izod Center, at the Meadowlands in nearby Bergen, is still needed.

"It didn't make sense to me to have two arenas competing," the New Jersey Star-Ledger reported acting Gov. DiFrancesco as saying last week. "Right from the start, the very notion of building a Newark arena meant redevelopment of the Continental (Izod) Arena site. We passed a bill in the Senate saying so, but we ran out of time to get it through the Assembly."

The dispute centers around two sports arenas built scant miles apart. One, the Izod Center at the Meadowlands, was formerly known as Continental Arena. Built in 1981, the 20,000 seat arena plays home to the New Jersey Nets until their new home on Brooklyn has been completed. While the Prudential was just opened in late 2007 and while slightly while smaller (500 fewer seats for concerts) is a state-of-the-art facility.

The original plan called for the Izod site to be redeveloped after the Pru opened. The Star-Ledger reported that a 2002 planning document produced by the The New Jersey Sports and Exposition Authority called for precisely that to happen if the new arena plans came to fruition. The document, entitled "The New Meadowlands: A Vision for the Future" specified that after the new arena was up and running, that the Authority would agree not to conduct any events or other activity at the existing Arena in competition with the Newark Arena," and that the Authority "envisions creating a multi-use destination at the Arena site" which would "promote smart growth and sound economic development."

But not everyone is still on the same page with this plan. Carl Goldberg, the chairman of The New Jersey Sports and Ex position Authority which oversees the operations of the Izod has stated that while this may have been the Authorities' view at one point, it isn't now. "As long as I have been here, it was never assumed the Izod Center would close when Newark was built." Goldberg told the Star-Ledger.

Concordantly, Goldberg and the Authority have released a new report, outlining a plan which he states will allow both arenas to profitably co-exist. "We don't see the arenas as being in competition. We see them as providing a wider range of entertainment and entertainment availability to the people of New Jersey," Goldberg said.

The report has been met with a degree of skeptical criticism from many quarters however. Essex county Executive Joe DiVincenzo, a proponent of closure has called the report suspect. "They violated their own mission to bring and keep professional sports in New Jersey by holding the Nets ransom," DiVincenzo said. "According to their lease, the Nets can relocate anywhere in the country without penalty, but they will be hit with a $12 million fine if they play in Newark. Is that good for New Jersey?"