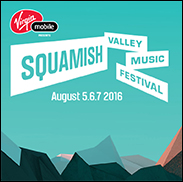 VANCOUVER, BC (CelebrityAccess) — Organizers for the Squamish Valley Music Festival have announced that the 2016 edition of the event has been cancelled. As well, the festival has deleted much of its social media presence, including its Facebook and Twitter pages, suggesting that the event may be on more than a simple hiatus.

Co-produced by the Vancouver-based BRANDLIVE Management group and Live Nation Canada, the festival was due to take place on August 5th, 6th and 7th at Logger Sports Grounds and Brennan Park field complex in Squamish, British Columbia.

“We have made the extremely difficult decision to not proceed with the 2016 festival, due to take place in August,” a statement posted on the festival’s website said. “This decision was not made lightly and we sincerely apologize to all the people this decision affects: the fans, artists, industry partners, corporate partners, suppliers and all of our supporters within the community of Squamish.”

While a reason for the festival's cancellation was not provided, the Canadian dollar is particularly weak against the American dollar. The festival also faced stiff competition from other festivals in British Columbia, including Pemberton, Shambhala, and Rifflandia in B.C. as well as Sasquatch, Bumbershoot and the Watershed Festival in neighboring Washington State. – Staff Writers