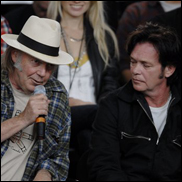 If you didn't manage to make the Farm Aid scene this year, you can still catch the show on DirectTV's channel 101, which will be broadcast at select times over the next week or via the 'net on farmaid.com.
The annual fundraiser debuted in 1985 in response to a comment made by Bob Dylan a year earlier at Live Aid when he said "I hope that some of the money…maybe they can just take a little bit of it, maybe…one or two million, maybe…and use it, say, to pay the mortgages on some of the farms."

Since then, the event has been going strong for 24 years and has raised nearly $35 million to help America's family farms. – CelebrityAccess Staff Writers