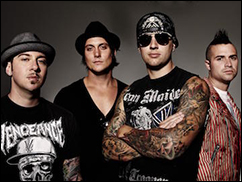 STUTTGART, Germany (CelebrityAccess) — One stagehand died and another was critically injured in an accident while breaking down the set for the Avenged Sevenfold and Disturbed tour after a show in Stuttgart, Germany on Monday.

In a post on Avenged Sevenfold's website, a rep wrote that a 26-year-old stagehand fell from the rafters while working on the front lighting truss and landed on 19 year-old man on the local crew. The 19-year-old was killed in incident, while the 26-year-old is hospitalized in critical condition.

"This is beyond heartbreaking to everyone in the band and on our crew. We all send our thoughts and prayers to the man in the hospital, both families involved, all of the local Live Nation crew and everyone else whose lives have been affected by this terrible accident. We love our crew so much as well as the many local staff who are essential to our show every night wherever we are around the world. This is such a stark reminder of how quickly an accident can happen and lives shattered in the process. When we hear more we will update you," the band said in the post.

Other details about the accident were unavailable at the time of publication. Avenged Sevenfold was due to perform in Milan, Italy, on Tuesday but pulled out of the show with the promoter citing illness in the band. Their next scheduled show is set for Feb. 23rd in Funfaus, Germany. – Staff Writers