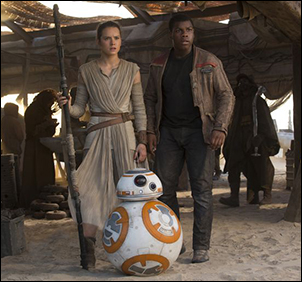 LOS ANGELES (CelebrityAccess) — “Star Wars: The Force Awakens” is not only the top movie for the third week in a row but it's looking to have the legs to beat out “Avatar” and “Titanic” for the top spot of number one movie of all time.


“When you look at the holding power of ‘Daddy’s Home’ and ‘Sisters,’ it shows you that those films are for many people the antidote to ‘Star Wars,'” said Paul Dergarabedian, a senior media analyst for box office tracker Rentrak. “The diversity of the slate that the studios created by not retreating from ‘Star Wars’ is helping.”


Quentin Tarantino’s bloody Western “The Hateful Eight,” meanwhile, took third with $16.2 million in its first weekend in wide release after a strong limited debut. The three-hour epic, which cost a reported $44 million to produce, has made $29.6 million to date — just shy of what “Django Unchained” made in its first weekend according to AP.


“There is still a big audience out there for auteur-driven cinema,” Dergarabedian said. “Tarantino, no matter what, is an interesting filmmaker. Film fans want to see what he’s up to. It’s not as big as some of his other films, but it’s still doing well as it expands.”


It was a huge week and year for the movies.