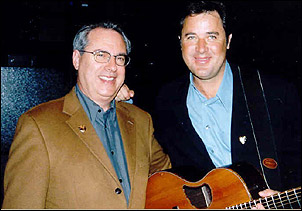 Steve Schankman, president of Contemporary Productions, LLC, will receive the Presidential Citation award at the Variety International convention in Chicago on April 11, 2003 for his continued dedication to St. Louis Variety and the disabled and disadvantaged children the organization serves.

Schankman is in his seventh year of lending his entertainment industry expertise to St. Louis Variety as the organization's Telethon Chairman. He also serves on the executive committee of Variety's Board of Directors. During his tenure as Telethon Chairman, Schankman has helped St. Louis raise more than $18.9 million for Variety's children.

"I am delighted and honored to be a part of the Variety family in helping the children of St. Louis lead better and more productive lives," Schankman said.

In previous years, Schankman has helped Variety bring in such acts as Kenny Rogers, Bernadette Peters, the Righteous Brothers, Gladys Knight, Ray Charles and other national entertainment legends for the Telethon. This year, Schankman played a major role in bringing in Wynonna Judd and Vince Gill for the annual extravaganza, which raised more than $2.3 million for St. Louis' disabled and disadvantaged children.

"Without Steve's support, Variety would not be able to continue fulfilling its mission of providing vital medical equipment and programs to thousands of St. Louis' neediest children," said Variety Board President Tony Ponturo, vice president of Global Media and Sports Marketing for Anheuser-Busch, Inc., and president and CEO of Busch Media Group, an Anheuser-Busch, Inc. subsidiary."

The St. Louis Variety Club is a nonprofit organization that has raised more than $61.2 million since 1932. Variety Club provides a better quality of life for more than 200,000 disabled and disadvantaged children in the Greater St. Louis area.