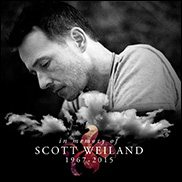 BLOOMINGTON, Minn. (CelebrityAccess) — Rocker Scott Weiland, the lead singer for Stone Temple Pilots and Velvet Revolver, has died. He was 48.

According to TMZ, Police were summoned to Weiland's tour bus on December 3rd, where they found an unresponsive Weiland who was later declared dead. A cause of death has yet to be determined.

Weiland was Bloomington for a show with his band, The Wildabouts, who were due to perform at the Medina Entertainment Center in Medina, Minnesota.

A native of San Jose, California, Weiland made a name for himself as a founding member and frontman for the seminal alt-rock group Stone Temple Pilots, who found chart success with hits such as Plush, Creep, Unglued, Vasoline, and numerous others. The band would go on to release six albums which hit the top ten in the Billboard 200, selling more than 40 million albums worldwide.

"I can't call the kettle black," Kiss drummer Peter Criss told Guitar World after Stone Temple Pilots pulled out of a support slot on the Kiss Reunion tour. "I just pray for the guy and hope that he gets himself better because they really are a great band."

Following the release of their 2001 album "Shangri-La Dee Da" which was a commercial disappointment, the band dissolved.

Weiland would go on to find new chart success with the supergroup Velvet Revolver, featuring former Gn'R members Slash, Duff McKagan and Matt Sorum as well as Wasted Youth guitarist Dave Kushner, but was eventually ousted from the group in 2008, with his band mates citing his "increasingly erratic" behavior.

In 2008, Weiland rejoined his former STP bandmates for a reunion, releasing new material and touring with the group, but tensions soon surfaced within the group and in 2013, the band announced they had parted ways with Weiland.

Weiland's exit from the band was followed by a spate of lawsuits, with both Weiland and the other members of the group contesting ownership of STP material.

Weiland is survived by his wife, Jamie Wachtel, whom he wed in 2013 as well as two children from a previous marriage to Mary Forsberg. Weiland was also married to Janina Castaneda through much of the 1990s. – Staff Writers