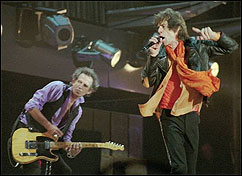 (CelebrityAccess MediaWire) — Through an unprecedented text messaging program, the Rolling Stones "A Bigger Bang" World Tour will give fans a chance to have their ticket exchanged and upgraded for a seat on stage.

Stones concert goers are encouraged to bring their cell phones to the concert and dial the reserved Rolling Stones code, 25852, and enter the word "Stones" (no additional charges, standard text messaging fee applies). Winners will be chosen through a random draw and will be escorted with one guest onto the stage for the performance.

Rolling Stones fans without a cell-phone can also enter to win by filling out an "On-Stage upgrade" ballot which will be available in the lobby of all venues.

Setting a new standard for electrifying performances and state-of-the-art stage production, fans with on-stage tickets will have an intimate and extraordinary view of the Rolling Stones and their view of the audience while becoming part of the backdrop and set.

The Stones' "A Bigger Bang" World Tour kicks off at Fenway Park, in Boston on August 21st. Ticket sales have reached record highs, with fans already purchasing 98% of all tickets currently available for sale. –by CelebrityAccess Staff Writers

SACREMENTO, CA (AP) — Concert tickets for major acts are costly, but $100,000 to see the Rolling Stones? That's the price to join Gov. Arnold Schwarzenegger in a luxury box at the Stones' Aug. 21 show at Boston's Fenway Park. The event will cap a multistate fundraising swing that begins next week for Schwarzenegger's Nov. 8 special election.

Schwarzenegger will host a private reception for 40 guests who give $10,000 each to his campaign account. Guests contributing $100,000 apiece will be invited to watch the concert with Schwarzenegger in a luxury box.

Fran Curtis, the Stones' publicist, said the band had no role in the governor's fundraiser.

The Stones' new album, "A Bigger Bang," is scheduled for release Sept. 6.