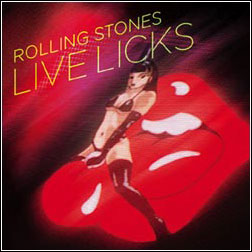 The Rolling Stones have documented their hugely successful 2002-2003 world tour with Live Licks (Virgin), a two-CD set featuring guest appearances by Sheryl Crow and Solomon Burke as well as 11 tracks never before released on a Stones live disc. It will be released on November 2. The tour celebrated both the band's 40th anniversary and the release of 40 Licks, the first Stones greatest-hits collection to span the group's entire career.

Live Licks is divided in halves: Disc one is a collection of such anthemic, universally loved songs as "Honky Tonk Women" (featuring Sheryl Crow), "Paint It Black," "Brown Sugar," "(I Can't Get No) Satisfaction," "Angie," "Start Me Up" and "Gimme Shelter." Disc two includes a collection of such lesser-known gems as "Can't You Hear Me Knocking," "Rocks Off," "When The Whip Comes Down" and "Worried About You." This disc also includes Keith Richards' rendition of the Hoagy Carmichael classic "The Nearness of You," as well as Stones versions of "Rock Me, Baby" and "That's How Strong My Love Is," songs not written by them but associated with B.B. King and Otis Redding, respectively. Disc two ends with Solomon Burke joining the band for a version of his own "Everybody Needs Somebody To Love."
None of the tracks on Disc 2 have been available on any previous Rolling Stones live CDs.

4. You Can't Always Get What You Want

4. Can't You Hear Me Knocking

5. That's How Strong My Love Is

6. The Nearness Of You

8. When The Whip Comes Down

12. Everybody Needs Somebody To Love