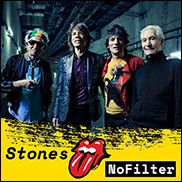 LONDON (CelebrityAccess) — Indefatigable rock legend The Rolling Stones announced their plans for a tour of Europe later this year.

On Tuesday, the group said they would take their No Filter Tour on the road for a series of thirteen shows, starting on September 9th at the Stadtpark in Hamburg, Germany, and wrapping on Oct 22nd at the brand new U Arena in Paris, France.

The tour, produced by Concerts West, will feature the band revisiting familiar fan favorites from their repertoire, but they promise to also include a couple of "unexpected" and "randomly selected surprises from their formidable arsenal of songs" as well.

The band's European tour follows up on the group's highly successful North American run in 2016 that included a historic concert in Havana, Cuba.

According to the Irish Sun, the band had been in talks over an additional show at Dublin's Croke Park stadium, but talks broke down over money.

An unnamed source told the Irish Sun: “The deal was very close to being signed. But they wanted too much of the gate money and won’t be playing Ireland now.

“Any Irish Stones fans who want to see them will have to look at traveling to one of their European dates now,” the source added. – Staff Writers