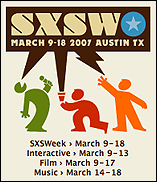 AUSTIN, TX (CelebrityAccess MediaWire) — In 2006 the Los Angeles Times declared, "Bands from all corners of the globe make SXSW a singularly international music moment." South by Southwest (SXSW) Music Festival March 14-18 has received 1,731 band applications from international artists for 2007 representing 23% of the total applicants. The largest group of applicants comes from Europe (972), followed by Canada (365), and the Pacific (316). Seventy-eight acts from a diverse list of countries ranging from South Africa to South Korea have also applied. SXSW expects that one quarter of this year's performing artists will come from outside of the United States.

"SXSW is in the flattering position to be a venue that international artists have found a useful part of their promotional strategy," says SXSW Creative Director Brent Grulke. "When people consider showcasing at SXSW, all they have to do is look at the incredible range of talent presented in prior years to
have a sense of the company they will be associated with and the potential
opportunity SXSW showcases represent."

International acts have found time after time that a SXSW showcase has
provided the essential buzz at a critical time in their US career development. The UK, which sends more bands to Austin than any other foreign territory, has seen the magic work repeatedly for the careers of artists such as Artic Monkeys, James Blunt, Jamie Cullum, Franz Ferdinand, David Grey and KT Tunstall.

This year 145 UK artists will descend on Austin including Paolo Nutini; Gruff Rhys; The Good, The Bad and the Queen; Amy Winehouse; Mika; and Lilly Allen.

"You only need to stand on a corner of Sixth Street during SXSW to appreciate why musicians from across the globe migrate to Austin during the four day festival," says Crispin Parry, London Underground, Creative Director British Music at SXSW. "It is one of the premier music experiences in the world and playing a showcase at SXSW can be the golden ticket for international acts, creating the 'buzz' that is essential for breaking into the US music scene."

Canada makes its biggest splash ever at SXSW 2007 with 108 invited acts.
The Dears, Metric and Broken Social Scene all picked up critical momentum in
the US following their SXSW appearances. This year's Quebeçois participants will also include francophone bands that represent the scene's newest cutting edge.

"One very exciting aspect of this showcase for us is the fact that we're presenting three French singing bands (Malajube, Les Breastfeeders and Call Me Poupée)," says Gourmet Délice, owner of Montreal production company Bonsound. "This will be a true test both for both the bands and us. We'll be able to get direct feedback from the different labels, promoters, distributors and media coming from around the globe who attend SXSW year after year in order to discover the next big thing."

Another record-breaking showing is due from Australia and New Zealand who
will be sending 42 bands to Austin this year. Leading the pack is the Hoodoo Gurus. "There's no better place in the world for a band with such a great live
reputation and history to reintroduce themselves than at SXSW," says manager Michael McMartin. "It allows the Gurus to play in a great music city, to avid music fans amidst an atmosphere that brings out the best in bands and fans alike."

These three largest international contingencies will share the SXSW spotlight with bands from 35 other countries ranging from Argentina to Uzbekistan. –Bob Grossweiner and Jane Cohen