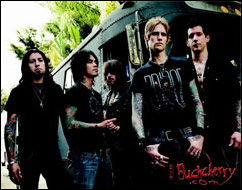 LOS ANGELES, CA (CelebrityAccess MediaWire) — Grammy-nominated, Gold-certified, Buckcherry and entertainment website ArtistDirect.com announced today an open call to fans to create their own video for the next single, "Everything" directing them to upload homemade videos to YouTube by March 9th. The band will then choose their favorite submission and the winner and a friend will receive roundtrip airfare, hotel accommodations, tickets and VIP access to the Buckcherry show in London on March 20 at the Mean Fiddler. Additionally the winning video will run/air for a month on Buckcherry's official website and myspace page.

The popular alt-rock band scored a major hit in 2006 with its provocative single "Crazy B*tch" which is also one of the most popular ring tones in the country.

Fans will create their "Everything" music video, upload it to the YouTube group youtube.com/group/buckcherrycontest and fill out the entry form through the ArtistDirect Buckcherry contest page: http://www.flashenhanced.com/buckcherry/.

Buckcherry were nominated for a Grammy Award for Best Hard Rock Performance for the smash-hit "Crazy B*tch" and can be seen performing the new single "Everything" on The Tonight Show on Friday, March 2.

While things seem to be going well for the band, frontman Josh Todd (real name Joshua Leroy) and the band are the subject of a lawsuit by a former business partner and friend Todd Meagher.

Todd intially filed suit against Meagher after Meagher formed a company called Todd Entertainment. Meagher is counter-suing Todd and a whole host of other defendants, including but not limited to Warner Music Group, Buckcherry Worldwide, Universal Music Group International, Kovac MediaGroup and The Kirby Organization. Meagher is alleging that he invested significant money and time in Todd's career and seeking an injunction against the group from touring, performing and recording. The lawsuit has been on-going since Sept. 2004 and no resolution appears evident in the near future.

In the meantime, tourdates for Buckcherry