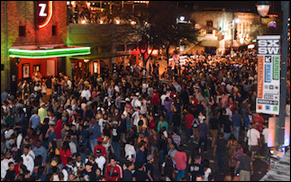 AUSTIN, TX (VIP NEWS) — The families of the victims of a fatal car crash at this year`s South by Southwest (SXSW) in Austin, Texas, are suing its organizers.


According to AP, the lawsuits accuse them of serious safety lapses.


Rashad Charjuan Owens has been in jail on murder charges since March after four people died when his car broke through a barrier at the music, film and interactive festival.


The crash, which happened outside the Mohawk venue, also injured 23 people.


Among several wrongful deaths lawsuits was one from the family of Steven Craenmehr, a Dutch music executive, who was knocked off his bike.


His widow and mother claim that SXSW organizers didn`t put enough traffic safeguards on the roads for pedestrians during the event, which sees thousands of bands performing at venues across Austin.


"A festival organizer or traffic design consultant of ordinary intelligence would have anticipated the danger," the lawsuit says.


Lawyers for SXSW released a statement which read: "What happened on Red River was a terrible tragedy, caused by Rashad Owen`s utter disregard of human life.


"Our hearts continue to ache for those injured and the families of those who lost their lives.


"We look forward to his prosecution for his awful crimes."


Authorities say that Owens drove his grey Honda Civic through a barricade after an officer on a drink-drive patrol tried stopping the car.


In September, a SXSW safety report found that alcohol consumption and overcrowded venues during the event had left Austin facing a "critical point where public safety could be compromised" if changes are not made.


Organizers called the report incomplete and said it failed to address root issues.