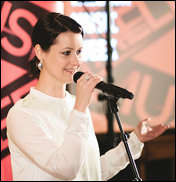 Helen Sildna is the founder and director of Tallinn Music Week, an annual talent showcase festival and music industry conference in Tallinn, Estonia. She has been involved in music industry for over 14 years as a promoter, artist booker and spokesperson for the new generation of local music entrepreneurs. She also runs and owns the music promotion company Musiccase and is an active member of various cultural development associations. She has been a board member of Estonian Culture Council, and is a member of President Toomas Hendrik Ilves’ Advisory Board. Helen has also had a key role in developing Estonian music entrepreneurship and export strategy. She was involved in setting up Music Estonia, to take an active role in representing the country’s music entrepreneurs and for developing international marketing strategy for Estonian music.

“Helen Sildna is an amazing powerhouse of energy, strong will and determination. With her vision and hard work she has built Tallinn Music Week into a fantastic event that has put Estonia firmly into the World map of popular music. She has great ears for spotting good new talent and she has also supported Finnish artists and music industry tremendously”, CEO of Music & Media Finland, Mr. Tapio Korjus describes Sildna.