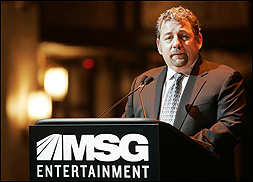 NEW YORK (CelebrityAccess MediaWire) — Telecommunications giant Cablevision has announced that it will acquire a 97% share of New York newspaper Newsday from the Tribune company for a cool $650 million.

The entertainment giant managed to beat out rival bids by Rupert Murdoch's News Corp and New York Daily News owner Mort Zuckerman who had each offered about 580 million for the newspaper. The Tribune Company, which still owns 3% of Newsday, had been looking to shift some of the nearly 8.2 billion dollar debt burden it acquired in the last year off of their corporate shoulders.

In addition to the 1.5 million circulation Newsday, other assets included in the deal are the free daily amNewYork, Newsday Interactive, which includes Newsday.com and other local information sites such as ExploreLI.com and Newsday.com/NZone, Star Community Publishing – the Northeast's largest weekly shopper group and Island Publications which produces targeted lifestyle magazines, including Distinction, Wellness, Parents & Children, LI Weddings and This Month on Long.

The acquisition has left many onlookers somewhat surprised, especially at the high price Cablevision was willing to sink into a newspaper, particularly in this time of restructuring and transition within the printed news business. But some analysts have suggested that Cablevision may be trying to diversify their offerings in the face of increasing competition from telecoms and satellite companies.