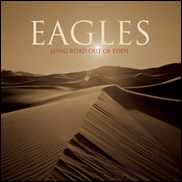 THIS is a mistake.

Have you heard the new Eagles album? I’m guessing no. Even though 3 million copies were moved by Wal-Mart, it was an impulse item for baby boomers. Sure, some hard core fans purchased the disc too, but if you don’t care about the Eagles, it’s like the album didn’t even come out, like it doesn’t even exist. There was some airplay for the initial J.D. Souther-penned song "How Long", but who listens to music radio anymore anyway? The Eagles/Wal-Mart deal was about the money. A way for the band to get a ton up front, guaranteed, and the retailer to drive customers into its stores to hopefully buy a washing machine or another big ticket item.

But I ask you, is a kid going to go to Wal-Mart to buy the new AC/DC album?

This is a head-scratcher. You see AC/DC is still signed to a major label. But you know why they made a deal with Wal-Mart? For the MONEY! Majors don’t give a shit about an act’s career, they just want their dough up front. To limit AC/DC sales exclusively to Wal-Mart is akin to limiting bubblegum sales to Tiffany. There aren’t many outlets and kids aren’t going to go there anyway!

Sure, there are oldster AC/DC fans. But if the band were only interested in the geriatrics, why did they wait eight years to make a record? They could have just recorded some power chords or goose farts and the oldsters would have picked up the CD at a discounted price at Wal-Mart. This is not educated buyers, listening to cuts on the radio first, this is out of it cretins who are shopping for detergent and giant boxes of corn flakes. Your hard core rock and roll audience? Give me a break.

Not that AC/DC doesn’t attract a blue collar audience, that might be its core, but why in HELL is the band leaving all the kids out? Does it just figure teens will steal the new album and is writing them off?

AC/DC is the biggest band still alive in the minds of teenagers. Pink Floyd vows to never tour again and Led Zeppelin ain’t hitting the boards soon, so that just leaves Angus and his crew, as the torchbearers of rock and roll. Oh, you say, what difference does it make, the band doesn’t offer its catalog on iTunes ANYWAY!

If METALLICA can make a deal with Apple, AC/DC certainly can. Is the band just that out of it? Having spent too much time Down Under? Kids want files, for their iPods, to take with them everywhere, to play at parties… And they want vinyl, as a badge of honor. And some even want the CD, to evidence their addiction. But AC/DC cares not a whit about all this, about the new generation. It’s like they’re having a fire sale, trying to get everybody’s dough one last time. They don’t understand what they MEAN TO PEOPLE!

What kind of crazy fucked up world do we live in where a band won’t let its fans buy its record? One where the only thing that matters is money? Where music takes not even a back seat, but rides in the trunk?

And I’ve got news for you Angus… Everybody listens to cuts now, everybody listens to his iPod on shuffle. To deny this is to appear as demented as the major labels themselves. If people want singles, let them buy them. You know how it works, don’t you? If you love the single, you buy more… Isn’t that the essence of fandom?

iTunes is not a perfect solution. But we live in a digital age. The album is dead. To keep one’s head in the sand, to stand on ceremony, is just fucking stupid. Who’s managing this band anyway?

The key is to make the music easier to access, easier to buy… Owning "Back In Black" should be so awe-inspiring, that you choose to experiment with earlier tracks. We want experimentation, don’t we? We want people to check things out, don’t we? So why do you have to drive to fucking Wal-Mart to buy the whole fucking album when all you want is the damn thing on your iPod?

And you wonder why recorded music sales are in the crapper. Not only the labels, but the acts are so out of touch with how people acquire and listen that the gulf may widen to the point where it’s ultimately impassable and music is truly free. AC/DC is BEGGING people to steal this album. The closest Wal-Mart to me is almost twenty miles away! Assuming there’s no traffic, that’s an eight dollar fuel surcharge on the disc. But at least I’ve got wheels… Kids, home from school, music addicts, but without their driver’s licenses, are inured to getting their music online. And if you won’t sell it track by track, they’ll steal it that way. If you don’t know this, you’re still living in the twentieth century, still waiting for Napster to come along and blow your mind.