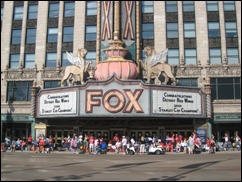 DETROIT (CelebrityAccess MediaWire) — Downtown Detroit was the center of attention as the Detroit Red Wings celebrated their 11th Stanley Cup Championship with a victory parade. The Red Wings defeated the Pittsburgh Penguins (3-2) in Game 6 of the Stanley Cup Finals, securing their fourth Stanley Cup in the past 11 seasons.

On Friday, June 6, approximately 1.4 million fans joined the Red Wings in a Stanley Cup victory parade through the streets of downtown Detroit. The parade began at Hockeytown Cafe, traveled south on Woodward Avenue and concluded with a rally at Hart Plaza. The 90 degree weather did not stop fans from jamming into Hart Plaza to catch a glimpse of Red Wings players hoisting the Stanley Cup in celebration of the championship.

Adding to the week of events, the heart of Hockeytown was energized on Wednesday, June 4, as 9,126 fans packed into Olympia Entertainment’s Joe Louis Arena to watch their beloved Red Wings win the coveted Stanley Cup on “Joe Vision.” The arena seats were filled with a sea of red and white fans in attendance at “The Joe” for the 8 p.m. start. –by CelebrityAccess Staff Writers