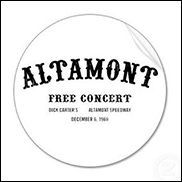 They were so untogether!

We think of the Stones as a seamless machine, all-knowing, hoovering up cash from all over the globe. But back in '69 they had a personnel change, they hadn't performed in America since '66, and they just weren't sure they were relevant, that they'd be embraced by the newly-hippified States, having missed not only the Summer of Love, but Woodstock too.

So they embraced Rock Scully, manager of the Dead, whose new business manager Lenny Hart re-signed the band to Warner whilst Rock was on a plane to London, where he got busted, despite Scully having negotiated a much better deal with Columbia. Isn't it interesting that the Dead ended up being signed to Clive Davis's Arista down the road.

Not that I can vouch for the veracity of all this. It's evidenced in Joel Selvin's new book about the rock tragedy, and he who writes down history owns it, and despite us knowing so much about the Stones it's amazing how little we do know. Selvin has reached into the bowels and uncovered not only who was sleeping with who, but how the gigs played out across the States before the tragic day.

Security for the tour was provided by someone no one knew who said he was in cahoots with both Chrysler and the NYPD. He provided his services for free, so no one probed.

The Stones blinked and confirmed the free concert because they were goaded into it by a critic, Ralph Gleason, who was complaining about high ticket prices, which weren't even close to ten bucks.

And the Stones were nearly broke. Getting paid was the main motivation for doing this tour. Which began with operations on Oriole, in the Bird Streets, high above L.A., with the band finishing up "Let It Bleed" and ended with them recording "Brown Sugar" and "Wild Horses" in Muscle Shoals.

But what you don't know, unless you lived through the era, was how different it all was.

We were making it up as we went along.

And from the east coast, California might as well have been Mars. And so many Americans were first or second generation, their parents weren't lawyers or bankers, but barbers and blue collar workers. Not only did you not know what everybody else was doing, no one knew what you were doing, there weren't security cameras everywhere.

And that's the big story of Altamont, how security was provided by the Hells Angels, the Stones unaware that the faction in the U.K. was a wimpy version of tribe in the Bay Area.

Were the sixties dark or light? Upbeat or tragic?

Today's right wing wants to deny their existence, wants to roll back all the advances made during that era. But the left wing papers over the drugs and debauchery, the people wasted along the way. You didn't smoke dope with your parents. Hell, I was shocked when a kid in my Boy Scout troop stood on the high school stage and told everybody he'd dropped acid every day of the previous year. It was an era where you knew so much yet knew so little. You wanted to belong, and it was music that was the glue. We were addicted to the radio, it told us not only what to believe, but what to do. It was the radio that had everybody showing up for a gig that was supposed to be somewhere completely different just days before.

Actually, it was supposed to be in Golden Gate Park. But rather than get a permit through well-greased channels, the Stones' operative went straight to the mayor and got bounced.

Sears Point Raceway would have been good. There was infrastructure, and maybe enough time. But after the stage was being built the owners freaked out, Filmways, which controlled the speedway, I know, sounds insane, wanted a piece of the movie. Jagger said no and the show ended up in a wasteland with no cops and no highways, talk about a disaster in the making.

But that was a different era.

Kind of like when you expected your computer to crash. My Macs haven't crashed in years. But there were days back in the eighties, even the nineties, when if you wanted to compute you had to know how the machine worked, everyone was a hobbyist, everyone was on their own, there were no help lines and no internet to aid you. But today my mother's got all the digital equipment, we excoriate a company if its product doesn't work right out of the box. But it didn't used to be that way.

It didn't used to be this way in music.

Sponsors, schmonsers. The gig took place at some building you rented where the owner had no idea what was going on. It wasn't until the nineties that concert promotion was consolidated. It was all territorial, and you didn't cross lines. And the people who owned those spaces…were renegades triumphing on will and intimidation, it was not about education. It's still not about education, the winners succeed on personality. But education buys you safety, and the established always want safety, especially for their children. That's what happens when you get a mature society, that's what happens when you get a mature business, like music.

It's not new folks. It was all codified between '64 and '79. Not only how to do a show, but who got the money. Credit Peter Grant, an intimidating wrestler, for making the acts rich, with 90/10 concert deals. And record royalties went up and the MTV era just showed the power of promotion, how much money could be made.

And nothing's changed since.

Three labels control recordings, as Steven Cooper said, you can't get on one of his playlists without being signed to Warner.

And there are two huge concert companies.

And you wonder why there's stagnation.

But it didn't used to be this way.

And now tech's hit a wall too.

I don't know, but change is coming, from somewhere we cannot predict.

And if you want to know what it's like to be in the maelstrom, the cauldron from which the future brews, read "Altamont: The Rolling Stones, The Hells Angels, And The Inside Story Of Rock's Darkest Day."

P.S. It's not coming out until 8/16, don't shoot the messenger, the book business hasn't gotten the memo. Peter Gabriel releases a Muhammad Ali song today with no advance warning and every newly-reviewed book is unavailable.

P.P.S. It's the details that will freak you out. A full delineation of Meredith Hunter, he becomes three-dimensional. That's what makes the book powerful, the raising of the story from the dead.

P.P.P.S. Everybody's googlable. That's right, read about a poet or Mickey Hart's girlfriend and you can immediately see what they look like yesterday and today, so many are still living. It was a different era, you didn't buy insurance, rather you lived your life to the fullest. Funny how these people are our heroes, as opposed to those who jumped through hoops.

P.P.P.P.S. It's all about judgment, and planning. Yet, the bleeding edge is populated by those on hejiras of personal fulfillment as opposed to wallet-lining. Success lies on the razor's edge of risk, a place those with experience and wisdom too often refuse to tread.