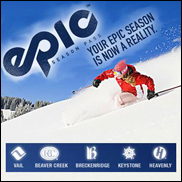 That was one of the most surreal concert experiences EVER!

We're in Colorado, for Spring Back To Vail (www.springbacktovail.com). Don't give me any recession crap. It's cheaper to be here than in L.A. Maybe because Vail Resorts figured out it was better to sell everybody lift tickets cheaper than to sell a few ducats at high prices to the private jet crowd. That's right, an Epic Pass was $579. Good every day of the year at not only Vail, but Beaver Creek, Breckenridge, Keystone, A-Basin and Heavenly. While record labels RAISE prices at the iTunes Store, some industries have economic sense, and realize, especially in a recession, you've got to give the public more for its money, not less. Imagine if tracks at the iTunes Store cost ten cents. DEVALUING MUSIC! HOW COULD YOU! Well, Vail Resorts just devalued skiing and had some of its busiest days in years.

People not only showed up to ski, they bought food, they dropped money all over town. Like if you lower concert ticket prices people will buy more booze and t-shirts. Assuming it's not ten bucks a cocktail and thirty bucks a t-shirt.

And in addition to skiing this week, they've got all kinds of
activities, including CONCERTS! Wednesday it was Chadzilla and…
Who knows, SOMEBODY! An 80's cover band. We knew all the cuts. If only Mutt Lange could find a moldable act and create an anthem, something everybody knows and enjoys. Like AC/DC's "You Shook Me All Night Long". Or maybe Dr. Dre could weigh in. What if we had a TV show where acts demoed their best material for a chance to work with real hitmakers, instead of has-beens like Randy Jackson and hacks like Kara DioGuardi. Let's demonstrate some real talent. But the bottom line is I want more universal music. Not Jimmy Iovine music, but something so good, everybody knows it, everybody plays it. Not that Top Forty dreck causing people to turn off music radio permanently, but infectious stuff like "Satisfaction" and Gnarls Barkley's "Crazy". Don't tell me no one knows what a hit is. How come Mutt could do it for not only AC/DC, but Def Leppard and Shania and even Michael Bolton. He's press-shy, but now that he's getting a divorce maybe he can finally come out in public.

But the key thing about watching Chadzilla was the vibe. Of live
music. For far too long the emphasis has been on studio creations.
You can't feel a record, but you can certainly feel a live show.

And we felt it tonight, as Chris Isaak showed up to play in a near- blizzard. He said he'd been performing for twenty five years, but had never played in the snow. They had to sweep the white stuff off the stage. When the percussionist hit the skins, snow jumped off his drums.

And there was not a single person in the crowd I knew. It was only about the music, the experience.

And rather than being choreographed for public consumption, the same show every night, Chris customized his rap for the evening, referencing not only the precipitation, but activities in the lodges, he personalized "Baby Did A Bad Bad Thing"…

I like Chris. It's hard to explain the magic of his Showtime series, but it was something you couldn't tune out. And he's still working with the same band. Not only the drummer Kenney, but Hershel Yatovitz, someone who made it in rock and roll DESPITE his name (thank you very much Chaim Witz!)

Stunningly, people talked through "Wicked Game". But it wasn't about hits, it was about the EXPERIENCE! The assembled multitude feeling the sound, bonding with the performers, having a one of a kind time.

U2's got a worldwide number one album, but it's truly about the show.
As evidenced by the almost instant sellouts of stadiums everywhere.

In other words, has the stranglehold of the record companies been a false premise? Maybe music is something you hear live as opposed to a concoction perfected in a studio. Maybe it's supposed to live and
breathe as opposed to being perfected to the point of sterility.
Maybe that's why we tuned out. Auto-tune. It was really Chris singing tonight. There was no fakery. The band laughed about their cold hands. But they played on.

I'm not saying recorded music should be free. I'm just saying that maybe the emphasis on the record has been misplaced, and we're only seeing the light now. Maybe the key isn't queuing up the track, but going to the gig and not knowing what to expect, being thrilled by the covers, like Chris' version of Cheap Trick's "I Want You To Want Me"
tonight, and overwhelmed by the guitar licks, the true sound of an acoustic guitar.

Life is for living. It's not something that's got rules, that has to be done a certain way so a small elite of gatekeepers will approve.

You know the hit of a live show. The great ones are all different.
Didn't the Grateful Dead prove this? The music washes over you and not only do you review your life memories, you make new ones, you can't help yourself, life is unfolding as you're standing there listening. You're catching the humans, wandering around in all their uniqueness, you're staring at the blowing snow in the spotlights, you're telling yourself HOW GREAT IT IS TO BE ALIVE!

That's music's power. Don't you ever forget it.