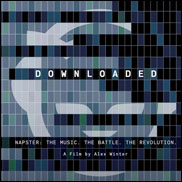 They didn't care about music.


We're in the tech era. But what they don't tell you is one day it's gonna run out of gas, it will be replaced by something heretofore unseen, dominated by nerds who were poor and got no attention and will suddenly rule the earth. Kind of like how the techies replaced the musicians.


Last night I watched the film "Downloaded," the story of Napster. Which seems like ancient history, even though it occurred little over a decade ago. But what would stun the music execs if they pulled their heads out of their rear ends is that their audience, today's teens, never knew any different, the free music/YouTube/Spotify/digital world is all they've ever experienced, and despite inane protestations from the boomer-driven media that vinyl is making a comeback, akin to stating that Model T's are replacing Teslas, the past is never ever gonna return.

Sure, Shawn Fanning wanted free music, prior to his app you could never afford everything, certainly not if you were a college student, but what motivated him even more was the challenges, and the riches, yes, Shawn Fanning wanted to be rich and famous and if you look back at the turn of the century landscape you can see that he's only slightly less known than Eminem and Justin Timberlake. A youngster watching this documentary would wonder who in the hell Fred Durst was.


So that's not much different from musicians, the desire to be rich and famous, it's just that Fanning achieved his goal and most musicians do not, what happened here?


Fanning knew it was about the code, that marketing came second, and he knew that the essence of virality was the wow factor, something absent from almost all music today.


In other words, music's heyday is done, it's a backwater.


Send me hate mail! Click away! Tweet that I'm an idiot. But the truth is Shawn Fanning was testing limits and musicians are not.

There, I said it. Shawn Fanning wanted to change the world, musicians just want to sit around and complain how nobody is listening, and if someone is, how they can't get paid.


You see music is bankrupt. Not financially, but emotionally, creatively.


Oh, don't e-mail me the exceptions. Certainly don't tell me about your band of shoegazing white boys who can't sing, or the wannabe rappers going on about drinking, drugging and driving. Where's the mass appeal in that?


Then again, the masses never know what they want, they arrive late. It starts with early adopters. Who glom on to something so damn cool they have to tell everybody about it.


The difference between Facebook and Twitter and music is the former are built upon the public's information, without it they're nothing, whereas music stands alone, if anything, the public gazes in adulation. Same deal with Apple. The product is tangible, not elusive, instead of chasing Wall Street dreams Apple is actually making stuff, that you can use to your advantage. So when you tell me how many Facebook friends and Twitter followers you've got I'm not impressed, I want to hear your music, and I want it to challenge and elate me all at the same time.


This is why Jay-Z screwed up. He subjugated the music to the tech, turning it into a data-mining expedition along the way. Yes, to unlock the lyrics from the Samsung app you've got to tweet that you're doing so. This isn't about music but commerce, and that's what's been the problem ever since…Napster eviscerated the music business.


Yes, feel triumphant RIAA, you killed Napster. But you also forced tons of music previously buried, unheard, from the Internet.

That was Napster's magic, the unearthing of live and rare tracks. This was healthy for both the artists and the music business. Because it got people excited about music, they wanted to hear this stuff, not the authorized pap put out by self-satisfied stars. Yes, we want to hear the work tapes, the unfinished version, that's how dedicated we are. New groups get this, they post rehearsal tapes on YouTube, but the problem is…there's nothing so cutting edge we need to hear it. Is "Blurred Lines" that good without the video? As for Justin Timberlake putting boobies in his new clip… Isn't that like trying to replicate the name your own price paradigm employed by Radiohead, which no one ever did?


Then again, I dare you to name two tracks from "In Rainbows." Radiohead's breakthrough was "OK Computer," since then?


Used to be music was a plethora of breakthroughs, before MTV made it about image more than sound and the CD was so expensive money rained down on record companies. Now everybody's about the money and there just isn't enough in music, which is why Bono is a VC and all the managers have tech investments.


But the techies knew the riches came last. At least the old school ones. They were mesmerized by the problem. That was the genius of Steve Wozniak, without him, Steve Jobs had no product to sell. Woz could solve the unsolvable overnight. Kind of like writing a hit song in ten minutes. But today a hit song is written in a camp and massaged by a ton of producers, the music's got no soul, and that's why it doesn't resonate.


Sure, there are occasional hits. But instead of recording another one this good, the artists make albums which no one wants to hear. We need another "Call Me Maybe," not nine more B grade versions.


Isn't it funny in tech the apps have to be totally usable, without glitches, but in music everybody complains the public doesn't want to listen to substandard music ad infinitum, especially when the greats of history are right next door.

Forget Doug Morris. Forget the labels. Their hearts are not in the right place. They're first and foremost about money, they're only interested in that which will sell, tonnage, instantly. Tech takes years to reach critical mass.


Until today. Yup, we're back in the dotcom era in tech. Everybody wants an instant hit. And what's great about the techies is they're not about music, only money, which leaves the playing field completely open to musicians…who have fumbled the ball.


In other words, you wouldn't expect a monkey to type "War and Peace" in his first sit-down with a typewriter and very few people know who they want to be when they're ten.


You've got the tools, but none of the inspiration. Leaders in tech are few and far between. Steve Jobs killed the floppy, the record labels are still invested in the CD.


How can you create something so interesting, so riveting, that we'll all pay attention?


That's what "Gangnam Style" was all about. Unfortunately, it was the MTV paradigm replicated in cyberspace, it was not about the music but the visuals.


But music is really damn hard to do.


And so is coding, building a great app.


The key is to be so skilled, so versed in the basics, that you're open to inspiration.


But today anybody with any skill is doing it the corporate way, playing to an ever shrinking Top Forty audience.


In the wake of income inequality and the focus on wealth, nobody wants to take the road less taken in the pursuit of genius. Oh, some say they do, but then they don't stop imploring us to pay attention.


That's what you hear again and again. It takes money and marketing to make a hit.


It only takes music.


There are very few great things in this life. And if you find one, you tell everybody you know.


Tell me the track in your library that will blow the minds of two hundred million Americans. It's not Rihanna, it's none of the usual suspects, but it was the Beatles, who were fresh and new and different. And if you asked the Beatles back in Hamburg if they were gonna conquer the world, they'd say they were honing their chops, getting laid and avoiding day jobs.


You've got to get on the road to get to the destination. You cannot travel by thinking about it.


We need a reset in the music business. We need it to be about the tunes, we need to get rid of the corporations, players need to believe in themselves.


And take us on a heretofore unseen journey.