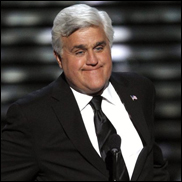 Everybody hates Jay Leno. And if you listen to this podcast, you can see why.


You see Jay's all about success. He doesn't want to be one of the guys. He just wants to be a


He's not the most talented and he's certainly not the best looking, so what does he do? Work!


It's been well established that he continues to do standup while hosting the "Tonight Show." Turns

out he works three times a week. Not for the money, but to keep the muscle in shape. If you don't

go up regularly, you get uptight, a stray cough or heckle can distract you. Furthermore, as

someone who doesn't write a single thing down, by doing his act so often, Jay remembers it. It

comes out fluently. As for his nightclub act… It's different from the "Tonight Show," it's

better, it has to be, because people expect more when they pay. As for paying, Jay will lower his

price in Vegas to sell seats. Something you'd never get a rock act to do, especially if the

promoter's Live Nation, they figure the public company can take the hit. But when you do your show

and seats are empty, or they're papered, you know who's hurt? You!


That's another thing Jay says, he never took a gig for the money.


Oh, Jay Mohr gets Leno to clarify this. And the point is it's not about the money, it's about the

gig! If you want to do it, if you think it'll help you get ahead, go for it. The money is

irrelevant. Jay tells the story of becoming the permanent guest host of the "Tonight Show," when

Johnny Carson was still on…

Jay got a call from the agent of one of the other acts being considered for the gig. This agent

said the competing comedians had banded together, that they were going to insert a most favored

Jay wouldn't play ball. He said he was going to ask for $512 an episode. Scale. He got the job.


Now this may stick in your craw. Then again, Jay is not one of the guys, he doesn't want to hang

with you, he just wants to work…and people deplore him for this.


Jay didn't want the money, he wanted the show!


And then Jay references the late night wars, you remember this, when his producer Helen Kushnick

put restrictions upon which shows you could do and when if you appeared with Jay. Jay says he was

night would suck. And Jay taped it and watched it and it did! Because instead of staying home and


And Jay doesn't go on vacation either…


Like I said, the longer you listen, the more you get this is the guy everybody complains about.

Then again, are showbiz friends really friends? Rock stars give me the time of day, but they're

not really my friend. Steven Tyler invited me to the Bowl, to sit right down front, but he didn't

invite me to the afterparty, where he hung with Johnny Depp until 2 a.m. You see I'm not a member


And the club's members are constantly changing, based on who's hot. Do you really want to fight

that hard, to stay in? What if you need someone to pick you up and take you to the hospital, to

talk you down off the ledge, who you gonna call? Not one of the rich and famous, certainly not if

you were hot ten years ago and are cold now.

Jay knows who he is. And he's not apologizing for it.


As for making it…


Jay never had a day job. He felt it would take away from his comedy career. Even though he was

busted for vagrancy twice on Hollywood Boulevard, even though he slept in the alley behind the

Improv in New York. You see Jay needed it that bad. Hell, he said if anybody can put in seven

years, they'll make it. But they can't change the act because they're burned out on it, they can't

change direction, they've got to keep on going… Most people can't take the abuse, can't put in

the effort, because no matter how big you are, there's always someone who thinks you suck, and

being on the road is not fun for anybody, certainly not after the first few years. Hell, it's

especially lonely if you're a comedian.

lousy gigs he once had. And fascinatingly, he spoke of taking a chance… All the comedians who

ruled in Boston but never left, because their acts wouldn't work in Hartford, they were too

Boston-specific. It's hard to leave your comfort zone, but that's what it takes to make it.


I knew Jay Leno was gonna make it. Because I saw him at the L.A. Improv back in '78 and he killed.

You see Jay was funny. Not so much because he was naturally funny, but because he worked at it.

And Jay makes a fortune, but by many people's standards, he's not reaping the rewards. He doesn't

have a slew of houses, doesn't holiday on the Riviera, he just does this. Well enough to keep his


We're going through a comedy renaissance. The old goal of enough recognition to get a sitcom is

done. Because those deals are not as prevalent and they don't pay so well. The oldsters are

horrified, because not only are opportunities fading, if you go on the road to build up your

"special," there's someone with a phone shooting you and your material is up on YouTube the next

In other words, the old comedy model is broken.


But it still pays to be funny. You just do it on "Funny or Die." You post a zillion YouTube clips

to build your audience. You appear on one of the many comedy podcasts, where fans are listening,

addicted. It's not just Marc Maron anymore, but Jay Mohr and Jimmy Pardo and Julie Klausner… The

comedians are working for free, this is where they get recognized, and the beneficiaries are…you

and me, the audience.


Listen to this Jay Leno podcast. To hear his work ethic. He went from having no place to sleep to

being on TV five nights a week. There were no tricks, no mirrors, no parents in the business. Just


And you've got to applaud him for that.

stories.php
Click on "Mohr Stories 78: Jay Leno", the podcast will start playing in the window below… Leno