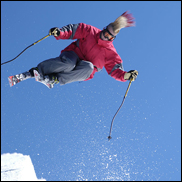 I've been reading this book about the corporate ski industry entitled "Downhill Slide". It delineates how consolidation of the ski industry has not only ruined communities but has contributed to the death of the sport. People used to go to the mountains for a rural experience, now the ski towns are urbanized, with all the flaws of the place you came from. Worse, corporations are in an arms race, fighting for the same customers. Spending to steal market share, which their competitors continually try to steal back. And how many people are willing to pay $92 a day to ski anyway?

But that's what you've got to charge if you've invested in high speed lifts, tons of grooming equipment and are publicly owned and must show a return. You build villages that ruin the essence of your appeal, all in the name of short term profits. Meanwhile, the number of skiers remains flat.

And then there's Bogus Basin. A second-rate, make that third-rate, ski area outside of Boise with no village, none of the supposedly de rigueur accoutrements. And tons of empty chairs on its lifts. So what did Mike Shirley, CEO of Bogus Basin, do back in 1998?

He dropped the price. A season pass was a veritable bargain by ski industry standards, a mere $500. But Shirley dropped it to $199. And the pass came with free season rentals and four free lessons for beginners. Kids under twelve skied the whole year for $29.

Do you get it? Skiing was perceived to be too expensive. As is music.

Please don't argue with me, just accept this. Or tell me you think it's worth ten thousand dollars to fill your iPod. And that you have. The key is to make everybody a music consumer. By lowering the price, by giving a deal. Sure, heavy consumers get a break, but so many will partake who didn't used to. Hell, this 99 cents a track formula isn't working. It's too much per track, so people don't buy that many. The key is to sell a season pass, that's eye-poppingly cheap. So even people who rarely buy music will sign up.

But costs must be controlled. You can't blow the revenue on hair and makeup and private jets to try and break the new Beyonce. You've got to be conservative. You've got to build slowly. You've got to reinvest. Instead of executives cashing out, the money's got to be left in the corporation's coffers.

Not enough people are buying music. If they bought some, they'd go to a show, buy some merch. Just like those skiers at Bogus Basin bought hamburgers and hot chocolate. Furthermore, they had a great time out on the slopes. What's better than a great record?

We've got to stop alienating the customer. We've got to restructure our business. Costs must come down. Expenses must be watched. Or the music industry will stay stagnant or decrease, just like the ski industry.