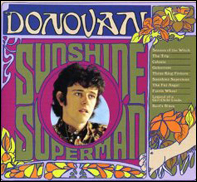 Was "Sunshine Superman" a hit during the summer?

Actually, it was, I just looked it up. It peaked at number one on August

13th in the summer of ‘66. The same summer the Lovin’ Spoonful’s "Summer In

The City" was a smash. That track reigned at number one right before

It may be hot in NYC, but the weather’s turned in L.A. A couple of nights

ago I actually needed the down comforter. And this morning, when I emerged

from my house, I noticed the light was different. Fall is coming.

I’ve come to hate summer. It’s not what it used to be, a vacation. And I

NEVER want to go back to school, but I’d love to have the eight weeks free,

to go to camp. Hell, I’d make that deal right now. I’d go to camp FOR THE

REST OF MY LIFE! You’re all thrown in together, no one leaves…that’s my

idea of heaven. Maybe as the only boy in a family run by women I’m looking

for that male-bonding, that camaraderie and the socials…

Actually, in the summer of ‘66 there were no socials. I went to Boy Scout

camp. Boy Scout camp has got no infrastructure. It could be removed in an

hour. Which is probably why it cost $22 a week. I could have saved if I’d

gone earlier in the summer with my troop, I could have paid $18, but I was

gone then, our family had traveled cross-country. Those family trips are

indelibly etched in my brain. You always think you’re going to go back.

Actually, I made a specific effort to go back to Yellowstone. Amazing how

it’s the same, but different.

But, as an adult, one works. One stays inside. I want to walk down the

street with a blade of grass between my teeth. I want to hear the ringing

bell of the Good Humor truck and rush out to buy a Toasted Almond. I want

to go to the beach.

Not Malibu. Not Hawaii or the Caribbean. The local beach in Connecticut had

a concrete block pavilion. Jennings Beach held no glamour, it was an

extension of the community. But there was a freedom. There was that walk

every afternoon up and down the sand.

Hearing "Sunshine Superman" on the radio this afternoon brought this all

back, put a smile on my face. What came next had me pushing the button back

in ‘67, but decades later I was riveted. Bobbie Gentry’s "Ode To Billie

You’ve got to understand, we hated everything that wasn’t rock. We almost

records made for our elders. I know every lick of "Hello Dolly", it’s taken

years for me to appreciate it. And even though I could enjoy "Strangers In

The Night", it seemed so SCHMALTZY! The music I liked STOOD for something.

Unlike this country concoction about Billie Joe McAllister jumping off that

damn bridge. Which I had to hear ad infinitum that summer, when I returned

merit badges to make Eagle, when "Ode To Billie Joe" was number one for

This is the line that cracked me up today. That’s now a joke. Uttered both

by people with land and without it. Ranchers and not. If someone shows up

late or tired they say they were plowing, doing some work on the back

forty. Did they get this concept from "Ode To Billie Joe"?


And wasn’t I talkin’ to him after church last Sunday night?


This was back when suicide was still a dirty word, before parents started

worrying about their kids offing themselves. But that’s what happens too

often. I just saw him! He looked fine to me!


My friend who committed suicide didn’t look fine to me. He called me in the

middle of the night all freaked out. I recognized myself years previously

in his voice. I insisted he go home to stay with his family, he needed

twenty four hour watch. When they went out for the night he went into the

basement and hung himself.

Time marches on. You get involved in your own life, moving forward. You’re

the past. Albeit older. And wiser.


What did they throw off the Tallahatchie Bridge?


I didn’t care forty years ago.


And I’m not sure I’m truly concerned today.


But what fascinates me was that it all happened on the third of June. When

the sun was out. During the heat of the summer. When everybody’s supposed