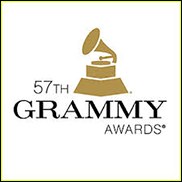 Because he who makes order out of chaos emerges triumphant.

I'm not saying it's important who wins, we all know artistic competitions are bogus, but appearing on the show? That's a victory. I'll even argue a Grammy is now more important than an Oscar, because the winners are easier to experience and check out further! You see them perform on the show and then, if interested, you can hear the rest of their music for free, online, whereas films are at least ninety minutes long and not easily available for one low price and you've got to credit the music business for getting it right.

Once upon a time a Grammy was irrelevant. When radio ruled and then MTV. We knew who was successful, who demanded attention. But just like Bruno Mars was anointed a star after his Super Bowl performance, everybody appearing on the Grammy telecast emerges a winner. With a leg up.

We don't have time to check out everything, which is why if you're on the undercard, if you didn't get nominated for an award that is televised, you've already lost. Oh, you can trumpet your nomination and possible victory in your press materials, but how are you going to get anybody to pay attention?

Attention is everything in today's world. Used to be there was a river of songs, now it's a veritable tsunami, which is why so many people get out of the way, they're afraid of being buried. But if someone makes sense of the incoming, if someone turns down the faucet to a trickle, then we're not so overwhelmed.

So, the most important person in the music industry today turns out to be KEN EHRLICH!

He's the starmaker. The only man who can get everybody's attention. He's the guy building the show. You may think gatekeepers are history, that the internet eliminated them, but the truth is those that still remain have even greater power.

You've read all about the nominees, if you're paying attention, but unless you're a fan, you may have never heard their music. This was IMPOSSIBLE in the old days, prior to the internet. Everyone heard the Beatles, everyone heard Culture Club, we lived in a monoculture in the eighties and nineties. But when everybody is a self-promoting wannabe living in a niche those who are not diehard fans are clueless. That's right, Top Forty is now a niche. A big one, but smaller than it's ever been.

But when these same trumpeted performers appear on TV, the looky-loos have a chance of being closed, which is why not only do you want to get on the telecast, you want to do your very best.

Oh, the ratings are high because it's winter and we savor live events, but don't overestimate the twittersphere, the Golden Globe ratings were down, snark lives, but Twitter has jumped the shark. Still, ratings will be good because we're all looking to be a member of the club, to be able to talk with our peers. That's why the Super Bowl ratings are so high, not because of the game, not even because of the commercials, but because it allows everybody to participate, to play the home game. That's right, you can go into work the next day with an opinion, you can contribute to the debate. Who are you going to debate about an appearance by Nick Cave? You went to the show, you enjoyed yourself and it turns out nobody at work has ever heard of him.

Credit Mike Greene, he made the Grammys legitimate. That's right, the show used to be a joke, not even a poor stepsister to the Oscars.

And also credit the present regime for knowing it's all about the TV show, the awards are irrelevant. They've reduced those given away on the telecast and Ken Ehrlich is doing his best to book superstar talent.

Hell, their album didn't even qualify, it was released too late, never mind having already tanked. But when those at home hear "You Shook Me All Night Long" or whatever nugget they and Ken agree to showcase, they'll be reminded of the band's greatness and have an urge to buy tickets.

McCartney hasn't done anything Grammy-worthy this year, but he'll appear.

Lady Gaga and Tony Bennett's record is irrelevant, but by being on the show they keep both of their careers alive. That's right, forget record sales, it's all about exposure, getting people to hear your music, and if you can do it at an event, more power to you.

And that's the world we presently live in, where the events are bigger than the performers. Coachella, Lollapalooza, Bonnaroo, ACL…they're the stars, the acts come and go. Headliners are necessary, but they change every year while the festival lives on.

Kind of like the Grammys. There's nobody who's necessary, there are enough stars out there. Piss someone off and the joke is on you.

Sam Smith won't become a star if he sweeps all the categories he's nominated in, but when he performs on the show. No one cares who wins, never mind remembers. The days of Bonnie Raitt being catapulted into the stratosphere are history, hell, there's not even much of a Grammy bump anymore.

And Jessie J… She'll go from obscurity to household name in a matter of minutes. That's the power of the Grammy telecast. It showcases everything important and there's no musical show as important, except for maybe the VMAs, but now that MTV airs no music and the show skews so young it triumphs in the demo but is sealed off from the rest of the public.

That's right, Grammy night is when the casual fan comes home to check out the goods.

And it really is all about the casual fan. Hard core fans will help you fill clubs, they'll pay your bills. But the music business depends on those who don't live for tunes, who can be convinced to listen and go to the show.

In other words, get out of your hole and see the big picture. The money is in mass. Don't want the money? Then stop bitching that someone rained on your parade, complaining about Spotify payments and road costs… Our whole nation has gone to a winner-take-all model and it's no different in music.

So congratulate those performing on the Grammys, they've already won.