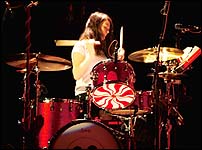 WILLMINGTON, DE (CelebrityAccess MediaWire) — Last month, music fans in Wilmington, Delaware were treated to a rare opportunity to experience a major touring act in the intimate setting of The Opera House.

The Stripes, composed of Jack White on guitar and vocals and his ex-wife Meg White on the kit, are currently touring in support of their most recent album "Icky Thump." Known for their red, white and black color schemes and their eclectic blend of blues and alt-rock with a punk ethic, the duo booked at The Grand in part due to Jack White's interest in performing in all fifty states and Delaware was still on the list. "We've been here, we've been there, and now we've been to Delaware!" Jack White told the crowd at one point during the show.

Stephen Bailey, the Executive Director at the Grand Opera House took a few moments to answer some questions about the show.

CelebrityAccess: How did the show go?

Stepehn Bailey: The show was stunning in every aspect. The production value was what you'd expect of a major, large venue tour. For the 1200 fans lucky enough to have a ticket I think they saw the White Stripes in a way that few have. The Grand, besides being one of the smallest venues on the tour, is uniquely designed in the old style of a true opera house where the audience is somewhat wrapped around the stage so every seat ends up being a great one.

CA: How did ticket sales work out?

SB: We actually had over two months from announcement to the show date. We devised a sales strategy that limited per purchase to four tickets with a Saturday onsale so that everyone would have the same chance at a ticket. The line began forming on Friday night with people camping till the 10am onsale. The show sold out as quickly as we could process the sales. It was all over pretty quickly.

CA: How much of a challenge was it for The Grand in accommodating the White Stripes from a technical point of view?

SB: With four semis carrying the production it probably should have been a very difficult day for the venue, but it was precisely the opposite. The White Stripes production team knew exactly what they were confronting and in the end they managed to get everything onto our stage except for one set piece that consisted of stairs in the upstage area. The set-up, soundcheck and the show went on schedule. To see The Grand transformed into a sea of red, white and black was pretty amazing. When the lights went down and Jack and Meg walked out on stage, it may as well have been Madison Square Garden because the roar of the crowd, the first thunderous bass of Meg's kick drum and the shear power of Jack's electric guitar washed over the venue to create an electricity that was overwhelming.

CA: A 1,200 seat theatre is an intimate setting to see a band like the White Stripes, how did the date come about?

SB: It was a somewhat peculiar series of events that led up to us getting the show. I had just heard what I thought was a rumor about the White Stripes wanting to play some, or all, of the states that they had not played on previous tours. Before I could even verify whether or not it was true, I got a call from Stan Levinstone of Stan Levinstone Presents and he confirmed what I'd heard. I really have to give the credit to him because he immediately proposed that we co-promote if we could get a confirmation. As everyone reading this can assume, there was a lot of crash banging around by those wonderful people who brought consolidation to the industry. I figured we had no chance of actually getting the show, but I knew and liked Stan so we decided to work together. We did the work that the agency asked us to do and, in the end, got the show. The thing that I like most about what happened is that all of the typical industry bullshit was set aside for a moment and this ended up being about The White Stripes and their fans. Without the agent, management and the group itself pushing in that direction it would not have happened. When you move from Madison Square Garden to The Grand Opera House with a $40 ticket, it's obviously not about the money. I salute Dave Kaplan, Monotone Management and The White Stripes for believing that we could get the job done.

CA: Any other opportunities for dates like this that you may be pursuing? Any performers that you'd give your proverbial eyeteeth to book?

SB: One of the interesting residual effects of The Whites Stripes dropping by is that it instantly validated what we've been saying for years. The Grand is a great venue for all kinds of music and the Delaware audience is starved for this kind of show. Since The White Stripes have come and gone we've confirmed Bright Eyes, Nickel Creek and The Avett Brothers as we get more exposure as the kind of venue and market that solidly supports a younger demographic.

On the question of performers on my personal all time "wish list" I'd have to say that Tom Waits is right up there as someone I'd love to present, but I have to admit that The Raconteurs or a repeat of The White Stripes would be worth surrendering a few teeth. – CelebrityAccess Staff Writers