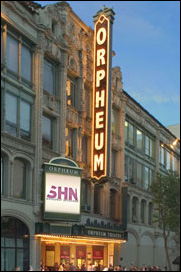 "I have a firm commitment to develop exciting new theater and move SHN forward as a presenter of world class entertainment on our magnificent stages", SHN's President Carole Shorenstein Hays said. "It is always a thrill to work with like-minded colleagues who share a similar vision. As a major concert promoting enterprise, Pacific Arts Presents is the perfect match in the music business to what SHN represents for theater. Irv Zuckerman and Steve Litman offer the ideal opportunity for SHN to expand our programming and bring new audiences into our theatres. "

"Our mutual goal is to bring the world's greatest concert entertainment to the greatest theatres in San Francisco", said Zuckerman. He added, "We are very excited to work with SHN in these amazing, historic theatres by presenting important artists who rarely perform in such intimate settings. The audience experience will be second to none."

"Audiences love the opportunity to enjoy major concert performances presented in these historic theatres and appreciate the experience that only their intimacy provides. This is the way great concerts were meant to be seen" commented Litman. "This agreement will create an even wider variety of entertainment events in the city, provide unique opportunities for the public and enhanced privileges for SHN's loyal subscribers.

SHN is the presenter of the Best of Broadway theater series, and owns and operates the Curran, Golden Gate and Orpheum Theatres. SHN consistently delivers the ultimate Broadway experience and fosters new works – spearheading world-class productions in its role as a major force on the national theatre stage.

Pacific Arts Presents brings together the talents of Zuckerman and Litman. Among other current projects they are co-producers, with Emery Entertainment, of the Blue Man Group "How to Be A Megastar 2.1" world tour. Zuckerman was the former CEO of Clear Channel Music (now known as Live Nation), the world's largest producer of live entertainment. Long time independent producer Litman has presented and continues to present concert events across the country, and is also the Executive Producer of all concert events at the historic Fox Theatre in St. Louis, Missouri. The association of Litman and Zuckerman has literally spanned decades and many hundreds of entertainment events. They are joined by veteran booker and promoter Jeff Zuckerman, who has re-located from Indiana to Los Angeles to take a key role in the new venture. – CelebrityAccess Staff Writers