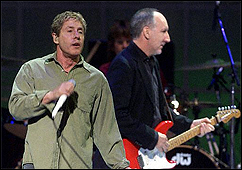 (CelebrityAccess MediaWire) — The Who and Roger Waters have been named as the headliners for the first annual Live Nation-produced Hyde Park Calling, a new rock festival set for July 1 and 2, in the central London park.

Waters is set to perform Pink Floyd’s iconic “Dark Side of the Moon” in its entirety on the first evening of the festival. Waters last played in the U.K. while reuniting with his former Floyd bandmates at the Live 8 concert last summer.

The Who will close the second night of the festval, exactly one year since their performance at Live 8. Daltrey cryptically told an interview that the Hyde Park Calling show may be the band’s final performance, saying that the concert will “give me the chance to play with the band I love. Maybe for the last time.”

So far, the only other groups confirmed for the gig are rockers Texas and Razorlight, but Live Nation plans to release “many more acts” in the coming weeks.

Hyde Park Calling will “piggy-back” on an existing concerts infrastructure Live Nation will have in place, the concert promoter’s managing director Stuart Galbraith told Billboard.biz. Through a deal with the Royal Parks authority, the market-leading concert promoter has a full line-up of events booked over three consecutive week in the summer, in a June 17 Foo Fighters show and the Wireless Festival from June 21 to June 25. –by CelebrityAccess Staff Writers