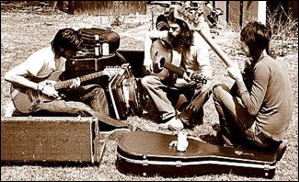 BOSTON (CelebrityAccess MediaWire) — After a gig at Boston's Orpheum theatre, a local classic rock band tucked themselves away and stayed the night in order to infiltrate a Neil Young show planned at the theatre for the next day.

According to the Boston Globe, members of the band Township had performed at the Boston Music Awards held on Dec. 1st at the theatre. After the show was over, the band equipped with sleeping bags, snacks and whiskey, tucked themselves away underneath the stage, only to emerge the next night just in time to see the sold-out Neil Young gig.

Kathleen Puzo, the band's manager, confirmed the stunt to the Boston Globe, but provided few additional details, telling the paper that “What happens at the Orpheum stays at the Orpheum, sometimes even overnight.”

The band had been selected to play at the BMA's as a perk for winning a local radio station contest.

Live Nation, which manages the theatre, had no idea that the sleepover occurred. “No one has heard anything about the rumored sleepover by Township,” Live Nation public relations manager Heidi Collins told the Globe. She went on to admit that the camp-out “would be pretty impressive if it actually did happen.”

The band's next gig is Jan. 12 at the Middle East. It is uncertain if they plan to stay overnight there, as well. – CelebrityAccess Staff Writers