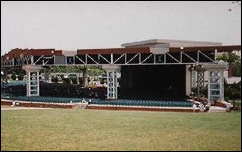 According to Triangle Business Journal, Live Nation's head of southeastern operations Rob Wooten has called Time Warner, the "lead runner" in the deal which would be worth, by some estimates, $600,000. Although LN is handling the negotiation process, the city of Raleigh has right of refusal on possible candidates.

Formerly known as the Alltel Pavilion, the shed went without a name sponsor last year after Alltel declined to renew their sponsorship agreement. Alltel had been the name sponsor since 1999, when they came on board for $2 million over 5 years. They renewed again in 2004 for 3 additional years, shelling out $1.5 million. Live Nation splits the naming rights revenue with the city and the venue has earned an average of $400,000 a year in this vein. – CelebrityAccess Staff Writers