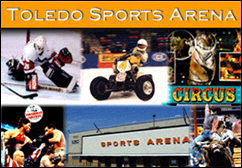 (CelebrityAccess MediaWire) — The Toledo Sports Arena is looking at a deal put forward by Ohio’s Lucas County Improvement Corp. to buy the 7,500-seat facility for $5 million as the city and county officials discuss plans to possibly build a new arena or amphitheater.

Mayor Jack Ford unveiled a Marina District development plan last week that includes an ice rink and an outdoor amphitheater, which would replace the aging Toledo Sports Arena, according to the Toledo Blade.

The mayor announced a plan for the city to purchase the arena for $5 million, and replace it with the amphitheater in a similar place. A feasibility study suggested that building a larger, 12,000-capacity arena downtown at an estimated cost of $70 million would work better for Toledo.

“Our studies have clearly concluded that corporate and business support is much stronger on the west side of the river. The arena development must be driven by market forces,” Ford told the paper.

The Marina District development, along the Maumee River, will cover 125 acres and include residential units, retail outlets, a hotel, stores, restaurants, a movie theater, a lodge, and a Great Lakes cruise lines terminal. The 5,000-seat shed-style amphitheater will cost about $7 million to build, according to the paper. –by CelebrityAccess Staff Writers